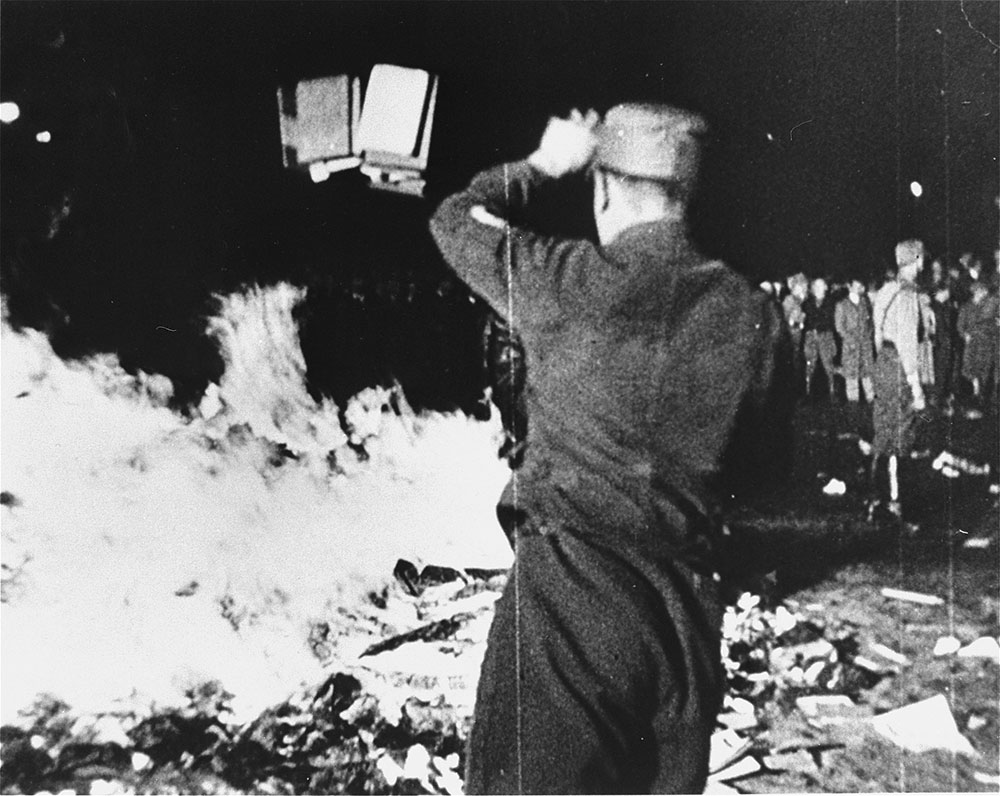 A member of the SA throws confiscated books into the bonfire during the public burning of "un-German" books on the Opernplatz in Berlin. —United States Holocaust Memorial Museum, courtesy of National Archives and Records Administration, College Park

On May 10, 1933 student groups at universities across Germany carried out a series of book burnings of works that the students and leading Nazi party members associated with an “un-German spirit.” Enthusiastic crowds witnessed the burning of books by Brecht, Einstein, Freud, Mann and Remarque, among many other well-known intellectuals, scientists and cultural figures, many of whom were Jewish. The largest of these book bonfires occurred in Berlin, where an estimated 40,000 people gathered to hear a speech by the propaganda minister, Joseph Goebbels, in which he pronounced that “Jewish intellectualism is dead” and endorsed the students’ “right to clean up the debris of the past.”

The response to the book burnings was immediate and widespread. Counter demonstrations took place in New York and other American cities, including Philadelphia, Cleveland, and Chicago. Journalists in the American and world press expressed shock and dismay at these attacks on German intellectual freedom, and various authors wrote in support of their assaulted German brethren. Artists, writers, doctors, and other intellectuals fled Germany, prompted by the barbarity of the book burnings and by continuing acts of Nazi persecution.

Such barbarity was just the beginning, however. One can see in retrospect how the book burnings and other steps to remove “Jewish influence” from German institutions foreshadowed much more catastrophic Nazi plans for the Jews of Europe. Eerily, among the books consigned to the flames in 1933 were the works of the nineteenth century Jewish poet Heinrich Heine, who in 1822 penned the prophetic words, “Where they burn books, they will, in the end, burn human beings too.”

The following bibliography was compiled to guide readers to selected materials on the 1933 book burnings that are in the Library's collection. It is not meant to be exhaustive. Annotations are provided to help the user determine the item’s focus, and call numbers for the Museum’s Library are given in parentheses following each citation. Those unable to visit might be able to find these works in a nearby public library or acquire them through interlibrary loan. Follow the “Find in a library near you” link in each citation and enter your zip code at the Open WorldCat search screen. The results of that search indicate all libraries in your area that own that particular title. Talk to your local librarian for assistance.

To search library catalogs or other electronic search tools for materials about the Nazi book burnings and the fate of literature during the Third Reich use the following Library of Congress subject headings to retrieve the most relevant citations: