On September 16, 1919, Hitler issues his first written comment on the so-called Jewish Question.

In the statement, he defined the Jews as a race and not a religious community, characterized the effect of a Jewish presence as a “race-tuberculosis of the peoples,” and identified the initial goal of a German government to be discriminatory legislation against Jews. The “ultimate goal must definitely be the removal of the Jews altogether.” Hitler's years in Vienna (1908–1913) and his military service were important stages for his development of a comprehensive racist ideology. 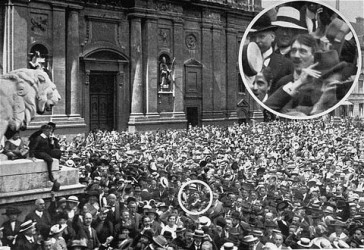 Photograph with inset showing Adolf Hitler attending a rally in Munich in 1914 celebrating the declaration of World War I. The years Hitler spent in Vienna (1908–1913) before World War I and his military service were important stages for his development of a comprehensive ideology. —US Holocaust Memorial Museum, courtesy of William O. McWorkman