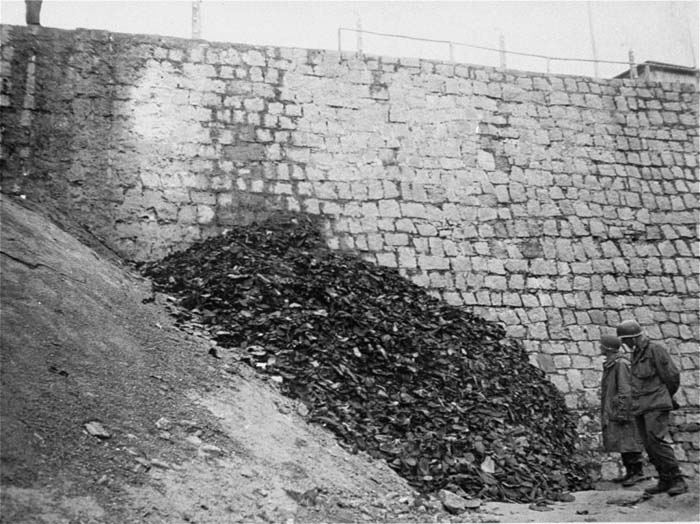 After the liberation of the Flossenbürg concentration camp, two US army infantrymen examine a pile of shoes belonging to victims of the camp. Flossenbürg, Germany, May 1945. —US Holocaust Memorial Museum, courtesy of Arnold Bauer Barach

As US forces approached the camp, in mid-April 1945, the SS began the forced evacuation of prisoners, except those unable to walk, from the Flossenbürg camp. Between April 15 and April 20, the SS moved most of the remaining 9,300 prisoners in the main camp (among them approximately 1,700 Jews), reinforced by about 7,000 prisoners who had arrived in Flossenbürg from Buchenwald, in the direction of Dachau both on foot and by train. Perhaps 7,000 of these prisoners died en route, either from exhaustion or starvation, or because SS guards shot them when they could no longer keep up the pace.

Thousands of others escaped, were liberated by advancing US troops, or found themselves free when their SS guards deserted during the night. Fewer than 3,000 of those who left Flossenbürg main camp arrived in Dachau, where they joined some 3,800 prisoners from the Flossenbürg subcamps. When members of the 358th and 359th US Infantry Regiments (90th US Infantry Division) liberated Flossenbürg on April 23, 1945, just over 1,500 prisoners remained in the camp. As many as 200 of them died after liberation.

Previous: Evacuation of Prisoners from Sachsenhausen Next: Soviet and US Troops Meet at Torgau