In a diary entry for this day in 1945, Anthony Acevedo writes: "Two more of our men died today. Plus one last night makes three. Plus sixteen makes nineteen. Deaths increasing in great number..."

Acevedo, a medic with the US Army's 70th Infantry Division during World War II, was captured by the Germans at the Battle of the Bulge and became a prisoner of war. He and several hundred fellow soldiers were transferred to Berga am Elster, a section of Buchenwald concentration camp. Acevedo was charged with caring for his fellow prisoners and recorded in a small diary the names and numbers of those who died to ensure their sacrifice would be remembered. 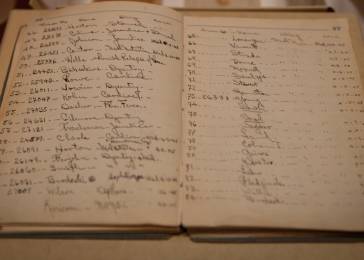 Page from diary kept by medic Anthony Acevedo while he was a prisoner of war. —US Holocaust Memorial Museum

Previous: US Troops Capture Ludendorff Railroad Bridge at Remagen Next: Liberation of Ohrdruf