So everybody took off their jewelry and money, whatever money was in the pockets, and everybody placed them in the buckets and the barrels. However, there were people who were wearing a watch perhaps since they were a child, or a wedding band for 10, 20, or 30 years. And they were so used to these that they didn't even realize anymore that they had it on. And they might have forgotten to put it in. And these people were taken and lined up against the wall to be shot later. Among them was my father. When he was searched after placing all these things into these barrels and buckets, they found a small amount, like a dollar bill, in one of his little vest pockets and because of that he was lined up against the war to be shot too. Now, this is my 14th birthday, and my father was to be shot in front of my eyes momentarily. It was a horrible time. But apparently they were—the SS and the gendarmes and the police—were not given orders yet to kill. Apparently, they were just given orders to use the worst scare techniques on us so that we would follow orders exactly as they wished, as they wanted us to do. So after several hours, until they collected all these loots, all these goodies, they released all these people that were lined up against the wall. Well, as I said, it was also one of the happiest moments of my life because my father wasn't to be killed. And that was in the end my happy 14th birthday. He was freed.

Following the German occupation of Hungary, Hungarian Admiral Miklos Horthy was permitted to remain as Regent, but Prime Minister Miklos Kallay was dismissed. The Germans installed General Dome Sztojay, who had previously served as Hungarian minister to Berlin and was fanatically pro-German, as prime minister. Sztojay committed Hungary to continuing the war effort and cooperated with the Germans in the deportation of Hungarian Jews, the last intact Jewish community in occupied Europe.

In April 1944, Hungarian authorities ordered Jews living outside Budapest (roughly 500,000) to concentrate in certain cities, usually regional government seats. Hungarian gendarmes were sent into rural regions to round up Jews of all ages and send them to the cities. The urban areas in which the Jews were forced to concentrate were enclosed and referred to as ghettos. Sometimes the ghettos encompassed the area of a former Jewish neighborhood. In other cases the ghetto was merely a single building, such as a factory. From May 15 to July 9, 1944, Hungarian gendarmerie officials, under the guidance of German SS officials, deported around 440,000 Jews from Hungary. 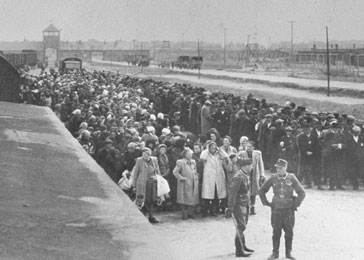 Jews lined up for selection on the ramp at Auschwitz-Birkenau. Poland, May 1, 1944. —Yad Vashem (Public Domain)

Previous: Creation of War Refugee Board Next: Deportation of Hungarian Jews