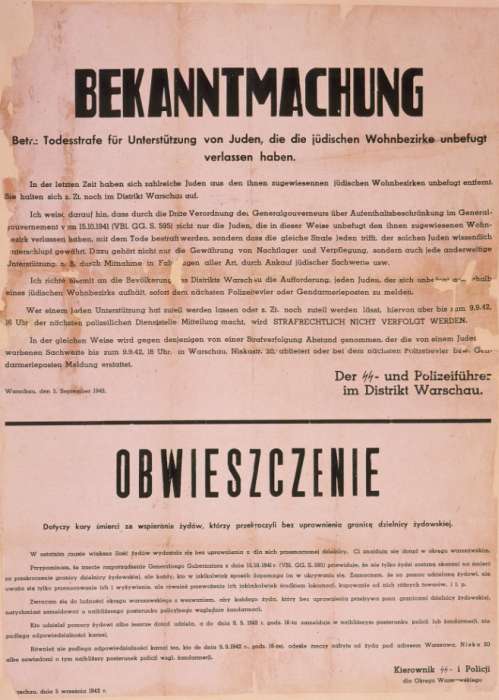 Handbill in German and Polish issued by the SS and Police leader in the Warsaw district announcing the death penalty for those who assist Jews who have left the ghetto without authorization. —US Holocaust Memorial Museum

Jews in hiding and their protectors risked severe punishment if captured. In much of German-occupied eastern Europe, such activities were deemed capital offenses. This September 1942 German poster, issued during mass deportations to the Treblinka killing center, threatens death to anyone aiding Jews who fled the Warsaw ghetto.

Recently, many Jews have left their designated Jewish residential areas. For the time, they are in the Warsaw District.

I remind you that according to the Third Decree of the General Governor's concerning the residential restrictions in the General Government of 10/15/1941 (VBL; abbreviation for Verordnungsblatt Generalgouvernement, p. 595) not only Jews who have left their designated residential area will be punished with death, but the same penalty applies to anyone who knowingly provides refuge to such Jews. This includes not only the providing of a night's lodging and food, but also any other aid, such as transporting them in vehicles of any sort, through the purchase of Jewish valuables, etc.

I ask the population of the Warsaw Destrict to immediately report any Jew who resides outside of a Jewish residential area to the nearest police station or gendarmerie post.

Whoever provided or currently provides aid to a Jew will not be prosecuted if it is reported to the nearest police station by 4 pm on 9/9/42.

Likewise, those who deliver valuables acquired from a Jew to 20 Niska Street or the nearest police or gendarme post by 4 pm on 9/9/42 will not be prosecuted.

The SS- and Police Leader in the Warsaw District