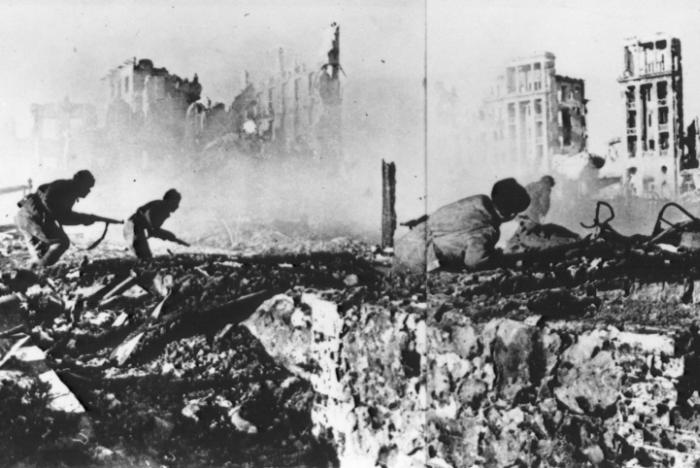 After months of fierce fighting and heavy casualties, German forces (numbering now only about 91,000 surviving soldiers) surrender at Stalingrad on the Volga.

Soviet forces launched a counteroffensive against the Germans arrayed at Stalingrad in mid-November 1942. They quickly encircled an entire German army, more than 220,000 soldiers. In February 1943, after months of fierce fighting and heavy casualties, the surviving German forces—only about 91,000 soldiers—surrendered. After the victory at Stalingrad, the Soviet army remained on the offensive, liberating most of the Ukraine, and virtually all of Russia and eastern Belorussia during 1943. The battle for the city of Stalingrad proved a decisive psychological turning point, ending a string of German victories in the summer of 1942 and beginning the long retreat westward. Germany proved unable to defeat the Soviet Union, which together with Great Britain and the United States, seized the initiative from Germany. Germany became embroiled in a long war, leading ultimately to its defeat in May 1945.

Previous: Letter Asking for Help to Hide Daughter Next: Liquidation of the Krakow Ghetto