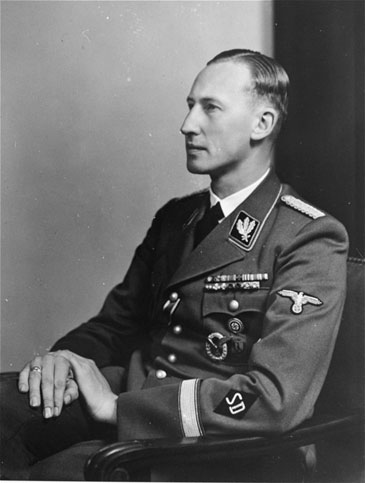 Heydrich was the chief of the Reich Security Main Office (RSHA) in Berlin—the SS and police agency most directly concerned with implementing the Holocaust during World War II.  While still chief of the RSHA, Heydrich also served as Acting Reich Protector of German-occupied Bohemia and Moravia. Czech agents who had trainined in Great Britain parachuted into German-occupied Czech territory to assassinate Heydrich. As Heydrich traveled on a familiar route to the airport to fly to Hitler's headquarters for a meeting, two Czech agents succeeded in rolling a hand grenade under his car. Though not mortally wounded by the blast itself, the grenade splinters in Heydrich’s leg and lower back led to an infection that killed him little more than a week later. In retaliation for the attack, the Germans unleashed a wave of terror against the Czechs. For example, they destroyed the Czech village of Lidice, shooting all the men in the village and deporting most of the women and children to camps in Germany.