Operation Reinhard in the Generalgouvernement, 1942. —US Holocaust Memorial Museum

Heinrich Himmler tasks the SS and Police Leader in Lublin District, SS General Odilo Globocnik, with implementing what later becomes known as “Operation Reinhard,” the physical annihilation of the Jews residing in the Generalgouvernement.

The Operation Reinhard team was ultimately responsible for the murder of approximately 1.7 million Jews, most of them Polish Jews. The overwhelming majority of victims in the Operation Reinhard killing centers—Belzec, Sobibor, and Treblinka—were Jews deported from ghettos in Poland. Once the killing centers were operational, German SS and police forces liquidated the ghettos and deported Jews by rail to those killing centers. The victims of Belzec were mainly Jews from the ghettos of southern Poland, and included German, Austrian, and Czech Jews held in the Piaski and Izbica transit ghettos in Lublin District. Jews deported to Sobibor came mainly from the Lublin area and other ghettos of the eastern Generalgouvernement; this killing center also received transports from France and the Netherlands. Deportations to Treblinka originated mainly from central Poland, primarily from the Warsaw ghetto, but also from the Districts Radom and Krakow in the Generalgouvernement, from District Bialystok, as well as from Bulgarian-occupied Thrace and Macedonia. 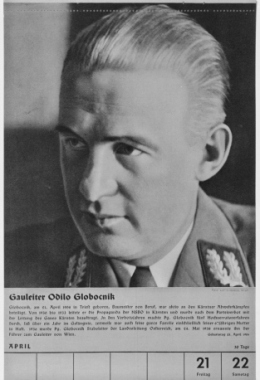 Portrait of Odilo Globocnik, Gauleiter of Vienna. This portrait was included in a 1939 calendar of Nazi officials. In 1941, Heinrich Himmler tasked Globocnik with implementing what would become known as “Operation Reinhard.” —US Holocaust Memorial Museum, courtesy of Geoffrey Giles

Previous: Deportations of German, Austrian, and Czech Jews Next: Massacre in Fort IX