The peoples [of the earth] will soon realize that Germany under National Socialism does not desire the enmity of other peoples. ... I want once again to be a prophet. If the international Finance-Jewry inside and outside of Europe should succeed in plunging the peoples of the earth once again into a world war, the result will be not the Bolshevization of earth, and thus a Jewish victory, but the annihilation of the Jewish race in Europe.

Amid rising international tensions Führer and Reich Chancellor Adolf Hitler tells the German public and the world that the outbreak of war would mean the end of European Jewry.

Inspired by Hitler's theories of racial struggle and the supposed "intent" of the Jews to survive and expand at the expense of Germans, the Nazis ordered anti-Jewish boycotts, staged book burnings, and enacted anti-Jewish legislation. But it was the nationwide pogroms (Kristallnacht) in 1938 and the outbreak of war in 1939 that marked the transition in Nazi racial antisemitism toward genocide. To justify the murder of the Jews both to the perpetrators and to bystanders in Germany and Europe, the Nazis used not only racist arguments but also arguments derived from older negative stereotypes, including Jews as communist subversives, as war profiteers and hoarders, and as a danger to internal security because of their inherent disloyalty and opposition to Germany. 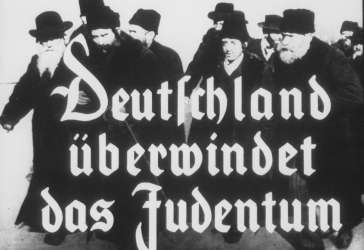