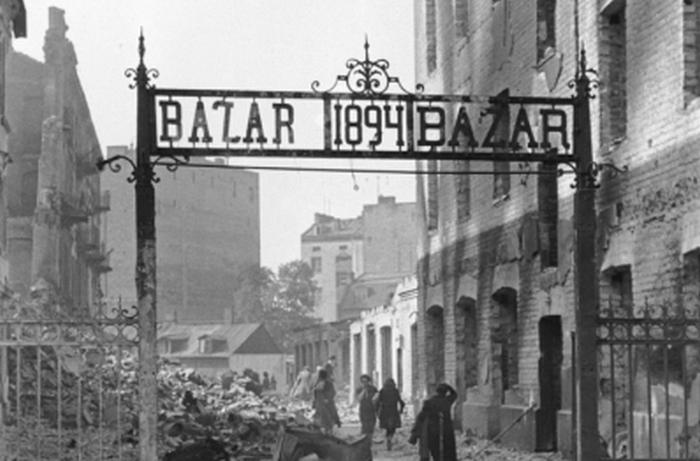 View of the entrance to a market that has been reduced to rubble as a result of a German aerial attack. Warsaw, Poland, September 1, 1939. —Julien Bryan Archive

German forces broke through Polish defenses along the border and quickly advanced on Warsaw, the Polish capital. Hundreds of thousands of refugees, both Jewish and non-Jewish, fled the German advance hoping the Polish army could halt the German advance. But, after heavy shelling and bombing, Warsaw surrendered to the Germans within a month of the German attack.  Soviet forces quickly annexed most of eastern Poland, while western Poland remained under German occupation until 1945.

Britain and France, standing by their guarantee of Poland's border, declared war on Germany on September 3, 1939. After the defeat of Polish forces, German authorities began enforcing their racial policies in the occupied territories. They required Jews to identify themselves by wearing white armbands with a blue Star of David and conscripted them for forced-labor. They expelled hundreds of thousands of Poles from their homes and settled more than 500,000 ethnic Germans in their place. 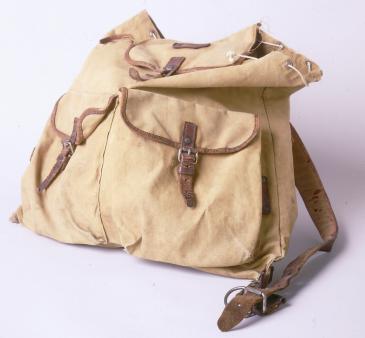 This tan backpack was used by Ruth Berkowitz to carry her belongings as she fled from Warsaw after the outbreak of World War II. Most of her possessions were confiscated by both the Nazis and the Soviets during her journey. [From the USHMM special exhibition Flight and Rescue.] —Ruth Berkowicz Segal; US Holocaust Memorial Museum - Collections