After Adolf Hitler's authorization in September 1941, German authorities began deporting German, Austrian, and Czech Jews from the Greater German Reich to ghettos, shooting sites, concentration camps, and killing centers, primarily in German-occupied Poland, the German-occupied Baltic States, and German-occupied Belarus, but also eventually to Theresienstadt in the Protectorate of Bohemia and Moravia. From October 15, 1941, until October 29, 1942, German authorities deport approximately 183,000 German, Austrian, and Czech Jews to ghettos, transit ghettos, killing centers, and killing sites in the Baltic States, in Belorussia, in the Generalgouvernement, and the Lodz ghetto.

The European rail network played a crucial role in the implementation of the Final Solution. Jews from Germany and German-occupied Europe were deported by rail to extermination camps in occupied Poland, where they were killed. The Germans attempted to disguise their intentions, referring to deportations as "resettlement to the east." The victims were told they were to be taken to labor camps, but in reality, from 1942 onward, deportation meant transit to killing centers for most Jews. Deportations on this scale required the coordination of numerous German government ministries, including the Reich Security Main Office (RSHA), the Transport Ministry, and the Foreign Office. The RSHA coordinated and directed the deportations; the Transport Ministry organized train schedules; and the Foreign Office negotiated with German-allied states to hand over their Jews. 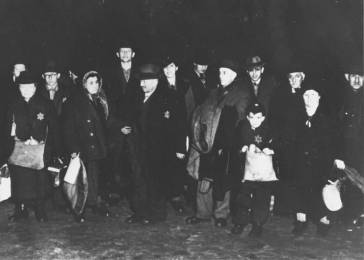 German Jews from the town of Coesfeld are assembled for deportation to Riga, Latvia. Coesfeld, Germany, December 10, 1941. —US Holocaust Memorial Museum, courtesy of Fred Hertz