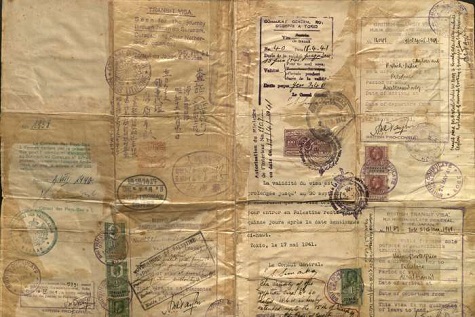 This document bears witness to the vast array of bureaucratic stamps and visas needed to emigrate from Europe in 1940–41. —US Holocaust Memorial Museum, courtesy of Samuel Soltz

The Holocaust took place in the broader context of World War II. On September 1, 1939, Germany invaded Poland. Over the next year, Nazi Germany and its allies conquered much of Europe. German officials confiscated Jewish property, in many places required Jews to wear identifying armbands, and established ghettos and forced-labor camps. In June 1941, Germany turned on its ally, the Soviet Union. Often drawing on local civilian and police support, Einsatzgruppen (mobile killing units) followed the German army and carried out mass shootings as it advanced into Soviet lands. Gas vans also appeared on the eastern front in late fall 1941.