There you see the Reichstag, the German house of parliament in Berlin, which has been seriously destroyed by fire. The main hall in which the deputies conducted their debates, has suffered most from the conflagration, and after the general election which is about to take place, parliament will have to find a temporary home elsewhere. Flames are no respecters of persons, and President Hindenburg's own chair was also destroyed. Hitler, now chancellor, has announced that the fire was the work of Communists, and was intended to be the signal for a Bolshevist uprising throughout the country. In consequence, Germany has been placed under a system of martial law, a decree having been signed which aims at the total destruction of communism.

The day after the German parliament (Reichstag) building burned down due to arson, President Hindenburg issues the Decree for the Protection of People and the Reich.

Though the origins of the fire are still unclear, in a propaganda maneuver, the coalition government (made up of Nazis and the Nationalists) blamed the Communists. They exploited the Reichstag fire to secure President Hindenburg’s approval for an emergency decree, popularly known as the Reichstag Fire Decree, that suspended individual rights and due process of law. The Reichstag Fire Decree permitted the regime to arrest and incarcerate political opponents without specific charge, dissolve political organizations, and to suppress publications. It also gave the central government the authority to overrule state and local laws and overthrow state and local governments. The decree was a key step in the establishment of the Nazi dictatorship. Germany became a police state in which citizens enjoyed no guaranteed basic rights and the SS, the elite guard of the Nazi state, wielded increasing authority through its control over the police. 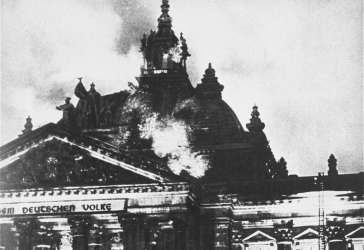