Nazi Party officials, members of the SA and the Hitler Youth carry out a wave of violent anti-Jewish pogroms throughout Greater Germany. The rioters destroyed hundreds of synagogues, many of them burned in full view of firefighters and the German public and looted more than 7,000 Jewish-owned businesses and other commercial establishments. Jewish cemeteries became a particular object of desecration in many regions. Almost 100 Jewish residents in Germany lost their lives in the violence. In the weeks that followed, the German government promulgated dozens of laws and decrees designed to deprive Jews of their property and of their means of livelihood even as the intensification of government persecution sought to force Jews from public life and force their emigration from the country.

After the pogroms, the implementation of German anti-Jewish policy was gradually concentrated in the hands of the SS. Thus, Kristallnacht figures as an essential turning point in Nazi Germany's persecution of Jews, which culminated in the Holocaust, the attempt to annihilate European Jews during the war. 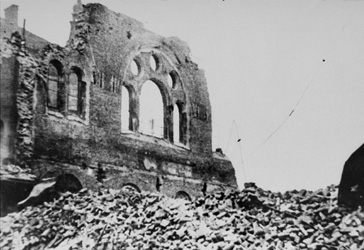 Demolition of the ruins of the Tempelgasse synagogue after its destruction during Kristallnacht. —US Holocaust Memorial Museum, courtesy of Dokumentationsarchiv des Oesterreichischen Widerstandes