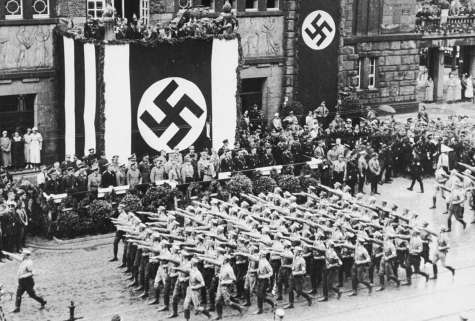 Hitler reviews an SA parade as it passes in front of the Dortmund theater. —Mahn- und Gedenkstaette Steinwache Dortmund

Following the appointment of Adolf Hitler as German chancellor on January 30, 1933, the Nazi state (also referred to as the Third Reich) quickly became a regime in which citizens had no guaranteed basic rights. The Nazi rise to power brought an end to the Weimar Republic, the German parliamentary democracy established after World War I.  In 1933, the regime established the first concentration camps, imprisoning its political opponents, homosexuals, Jehovah’s Witnesses, and others classified as “dangerous.”  Extensive propaganda was used to spread the Nazi Party’s racist goals and ideals. During the first six years of Hitler’s dictatorship, German Jews felt the effects of more than 400 decrees and regulations that restricted all aspects of their public and private lives.