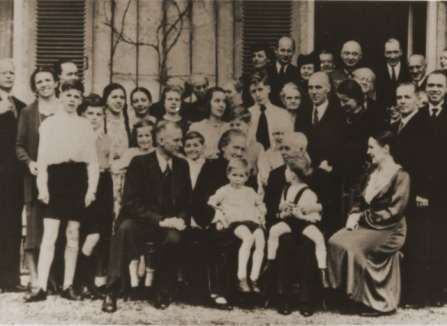 Dietrich Bonhoeffer was born in Breslau on February 4, 1906, the sixth child of Karl and Paula Bonhoeffer. His father was a prominent professor of psychiatry and neurology; his mother was one of the few women of her generation to obtain a university degree.

Paula Bonhoeffer chose to educate her children in their early years at home. She had observed that “Germans have their backbones broken twice in life: first in the schools, secondly in the military.” 1 Her emphasis on a strong moral and intellectual character was shared throughout the Bonhoeffer family. This became evident in the tragic aftermath of the failed attempt to kill Adolf Hitler, when four members of the immediate family were executed: two sons (Dietrich and Klaus) and two sons-in-law (Hans von Dohnanyi and Rüdiger Schleicher).

From the beginning, Bonhoeffer’s interests took him beyond the traditional realm of German academia, and his intellect and theological achievements won him early renown. He completed his studies in Tübingen and Berlin with a 1927 dissertation, Sanctorum Communio, under Reinhold Seeberg. In 1928, he served as vicar in the German parish in Barcelona; in 1930, he completed his theological exams and studied at Union Seminary in New York. He also became active in the fledgling ecumenical movement, making international contacts that would prove crucial to his work in the resistance. In 1931, Bonhoeffer began teaching on the theological faculty in Berlin.

With Hitler’s ascent to power at the end of January 1933, Bonhoeffer’s church entered the most difficult phase in its history. Since its inception, the German Evangelical Church (the main Protestant church in Germany) had been shaped by nationalism and obedience to state authority. Influenced by these traditions, and relieved that a strong new leader had emerged from the chaos of the Weimar years, many Protestants welcomed the rise of Nazism.

In particular, a group called the Deutsche Christen (“German Christians”) became the voice of Nazi ideology within the Evangelical Church, even advocating the removal of the Old Testament from the Bible. In the summer of 1933, citing the state Aryan laws that barred all “non-Aryans” from the civil service, the Deutsche Christen proposed a church “Aryan paragraph” to prevent “non-Aryans” from becoming ministers or religious teachers.

The ensuing controversy almost split the German Evangelical Church. Despite widespread antisemitism and enthusiasm for Nazism, most church leaders steadfastly supported the “Judenmission”—the evangelization, conversion and baptism of Jews. But the Deutsche Christen were already claiming that Jews, as a “separate race,” could not become members of an “Aryan” German church even through baptism—a clear repudiation of the validity of Gospel teachings.

Protestant opposition to the Aryan paragraph, then, was not based upon disagreement with Nazi racial policies, but upon an important element of Christian doctrine. Nonetheless, the issue led church leaders into a public debate about one of the most crucial aspects of Nazi ideology. In this initial battle to retain church independence, most church leaders avoided the deeper issue: that the civil rights of all German Jews had been attacked. Indeed, many who opposed the church Aryan paragraph otherwise supported the regime’s restrictions on German Jews.

Bonhoeffer bitterly opposed the Aryan paragraph, arguing that its ratification surrendered Christian precepts to political ideology. If “non-Aryans” were banned from the ministry, he argued, then their colleagues should resign in solidarity, even if this meant the establishment of a new church — a “confessing” church that would remain free of Nazi influence. This was a minority view; most German bishops wanted to avoid antagonizing the Nazi regime and to keep their regional churches together.

The strongest opponents of Nazi interference in the churches, including Dietrich Bonhoeffer, eventually did form the “Confessing Church.” But, while some Confessing Christians moved toward open resistance against the regime, more moderate Protestants (inside and outside the Confessing Church) made what they saw as necessary compromises. As the Nazi dictatorship tightened its hold, the Confessing Church itself became paralyzed.