The ultimate question for a responsible man to ask is not how he is to extricate himself heroically from the affair, but how the coming generation shall continue to live.

In the years since his death, the Protestant theologian Dietrich Bonhoeffer has become widely known as one of the few Christian martyrs in a history otherwise stained by Christian complicity with Nazism. Executed in the Flossenbürg concentration camp on April 9, 1945 for his role in the resistance against Hitler, Bonhoeffer’s letters and theological works still influence Christians throughout the world.

In many respects, however, Bonhoeffer’s legacy is complex. His experience under Nazism thrust him into profound conflict with much of his religious tradition, raising questions that he was unable to resolve before his life was ended. These questions continue to confront those who explore Bonhoeffer’s relevance today. 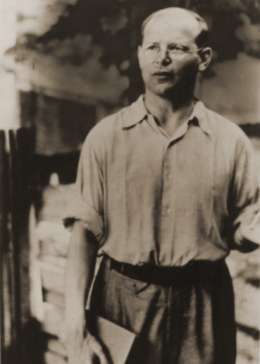 Dietrich Bonhoeffer, in the Tegel prison in Berlin a year after his arrest. Christian Kaiser Verlag

This is particularly true with regard to Bonhoeffer’s understanding of the Christian-Jewish relationship. In his political insights and public opposition to the Nazi regime, Bonhoeffer certainly went beyond most of his colleagues and compatriots. Still, much of his theological work reflected traditional Christian attitudes toward Judaism. Like most Christians of his generation, Bonhoeffer believed that God’s special destiny for the Jewish people included their eventual acceptance of Jesus as the Messiah.

As a result, Christian and Jewish scholars evaluate Bonhoeffer’s legacy quite differently. For many Christians, his resistance against Nazism and the profound insights in his writings offer new ethical and theological models. Some Jewish scholars, however, contend that Bonhoeffer acted on behalf of his church and was driven by his own deep sense of patriotism, not for the sake of the European Jews. Because of this, and because the Christian tradition was his central point of reference, much of Bonhoeffer’s thought seems irrelevant, at best, to the Jewish community.

How should we understand Dietrich Bonhoeffer’s role? What were his motives? What is his legacy to us in the aftermath of the Holocaust?