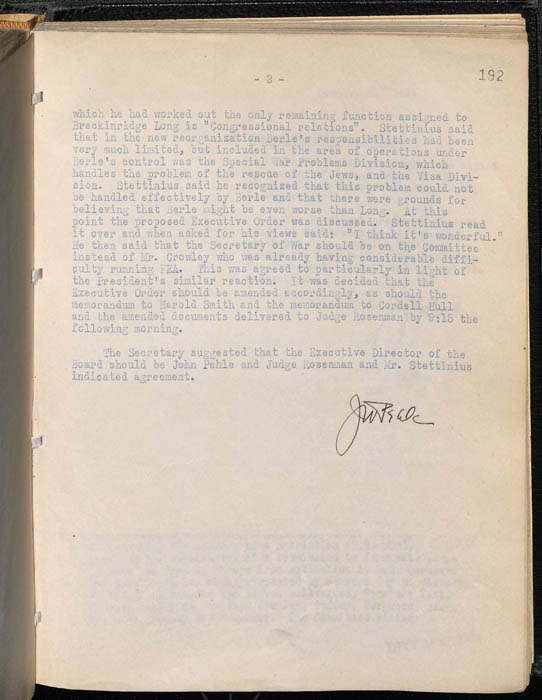 which he had worked out the only remaining function assigned to Breckinridge Long is “Congressional relations”. Stettinius said that in the new reorganization Berle’s responsibilities had been very much limited, but included in the areas of operations under Berle’s control was the Special War Problems Division, which handles the problem of the rescue of the Jews, and the Visa Division. Stettinius said he recognized that this problem could not be handled effectively by Berle and that there were grounds for believing that Berle might be even worse than Long.  At this point the proposed Executive Order was discussed.  Stettinius read it over and when asked for his views said: “I think it’s wonderful.” He then said that the Secretary of War should be on the Committee instead of Mr. Crowley who was already having considerable difficulty running FEA. This was agreed to particularly in light of the President’s similar reaction. It was decided that the Executive Order should be amended accordingly, as should the memorandum to Harold Smith and the memorandum to Cordell Hull and the amended documents delivered to Judge Rosenman by 9:15 the following morning.

The Secretary suggested that the Executive Director of the Board should be John Pehle and Judge Rosenman and Mr. Stettinius indicated agreement.

The memo reads in part, “[Secretary] Morgenthau advised the President that he was deeply disturbed about the failure of the State Department to take any effective action to save the remaining Jews in Europe.  He explained that the Treasury Department...had uncovered evidence indicating that not only were the people in the State Department inefficient in dealing with this problem, but that they were actually taking action to prevent the rescue of the Jews....the Secretary said he was convinced that effective action could be taken and referred to results that his father, Henry Morgenthau, Sr., had obtained when he was Ambassador to Turkey in getting the Armenians out of Turkey and saving their lives.”