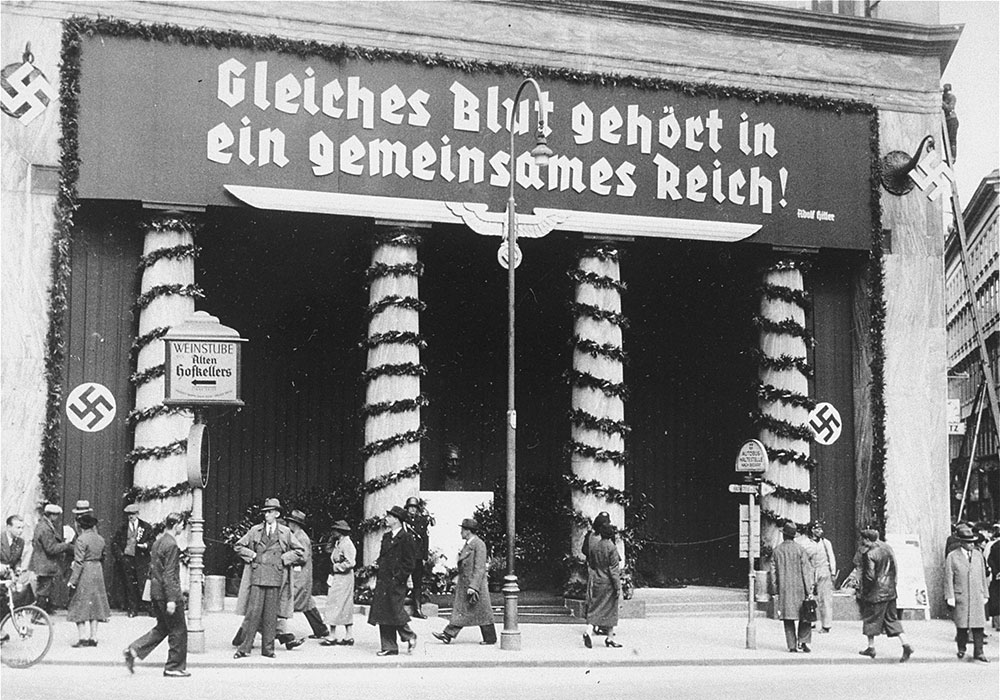 View of the Loos Haus, a public building in Vienna, adorned with decorations and a large banner bearing a quote from Hitler, "Those of the same blood belong in the same Reich!" —United States Holocaust Memorial Museum, courtesy of Library of Congress

Following World War I, Austria was weakened by a period of economic stagnation and political strife. At this same time, Nazi propaganda inside Austria intensified, and as early as 1934, just a year and a half after Hitler came to power in Germany, a group of Nazis seized the Austrian chancellery and attempted to proclaim a government. Though they did not succeed, they did assassinate the chancellor, Engelbert Dollfuss.

Kurt von Schuschnigg replaced Dollfuss as head of the Austrian government, but the political factions and unrest left him with little popular support. The regime held on for a few years, sustained primarily through Italy’s assistance, but once Hitler allied with Mussolini, Austria’s resulting political isolation spelled its fate. Schuschnigg made one last attempt to assert Austrian independence by declaring a nationwide plebiscite to determine whether Austrians wanted a “free, independent, social, Christian and united Austria,” but in the face of Nazi demands, he cancelled the plebiscite and resigned his post. The next day, March 12, 1938, German troops entered Austria, and one day later, Austria was incorporated into Germany.

This union, known as the Anschluss, received the enthusiastic support of most of the Austrian population and was retroactively approved via a plebiscite in April 1938. Although neither Jews nor Roma (Gypsies) were allowed to vote, the results were manipulated to indicate that more than 99 percent of the Austrian people wanted the union with Germany.

Widespread antisemitic actions and political violence followed quickly on the heels of the Anschluss. Austria’s leading politicians were imprisoned, and anyone opposing the Nazi rule was subject to arrest, torture, and death. Jews particularly were attacked and humiliated on the streets. The Gestapo, along with Austrian Nazis and sympathizers, looted Jewish belongings, seized Jewish businesses, and arrested those who refused to surrender their property. Furthermore, anti-Jewish legislation was in place almost immediately, forcing Jews from their positions, and essentially expelling them from the country’s economic, social, and cultural life.

The following bibliography was compiled to guide readers to materials on the Anschluss that are in the Library’s collection. It is not meant to be exhaustive. Annotations are provided to help the user determine the item’s focus, and call numbers for the Museum’s Library are given in parentheses following each citation. Those unable to visit might be able to find these works in a nearby public library or acquire them through interlibrary loan. Follow the “Find in a library near you” link in each citation and enter your zip code at the Open WorldCat search screen. The results of that search indicate all libraries in your area that own that particular title. Talk to your local librarian for assistance.

Ask at the reference desk to see the following subject files for newspaper and periodical articles.

To search library catalogs or other electronic search tools for materials on the Anschluss, use the following Library of Congress subject headings to retrieve the most relevant citations: