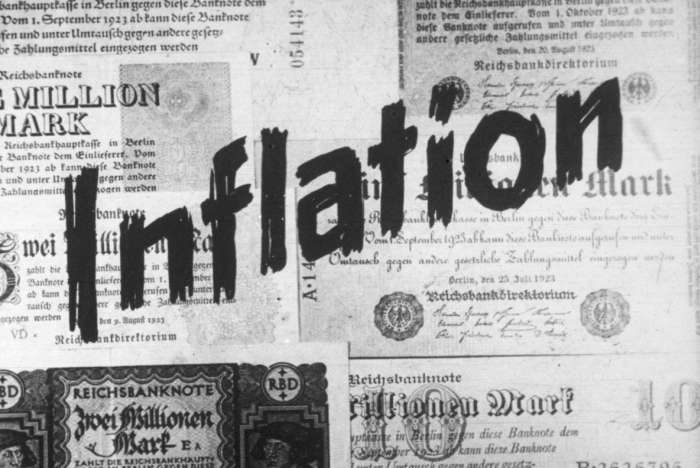 A slide about inflation from a Hitler Youth slideshow about the aftermath of World War I, the Treaty of Versailles, and the rise of Nazism. —US Holocaust Memorial Museum, courtesy of Stephen Glick

The Treaty of Versailles is presented to the German delegation on May 7, 1919.

The Treaty of Versailles forced Germany to concede vast European territories and overseas colonies. Perhaps the most humiliating portion of the treaty for defeated Germany was Article 231, commonly known as the "War Guilt Clause," which forced the German nation to accept complete responsibility for initiating World War I. Germany was required to make enormous reparation payments. In addition, the German military was to be severely limited in size and armaments.

The peace treaty did not ultimately help to settle the international disputes which had initiated World War I. The dreadful sacrifices of war and tremendous loss of life, suffered on all sides, weighed heavily. Revision of the Versailles Treaty represented one of the platforms that gave radical right wing parties in Germany, including Hitler's Nazi Party, such appeal to mainstream voters in the 1920s and early 1930s. Promises to rearm, to reclaim German territory, particularly in the East, and to regain prominence again among European and world powers after a humiliating defeat, stoked ultranationalist sentiment and helped average Germans to overlook the more radical tenets of Nazi ideology.

Previous: Battle of the Somme Next: Adolf Hitler Issues Comment on the “Jewish Question”