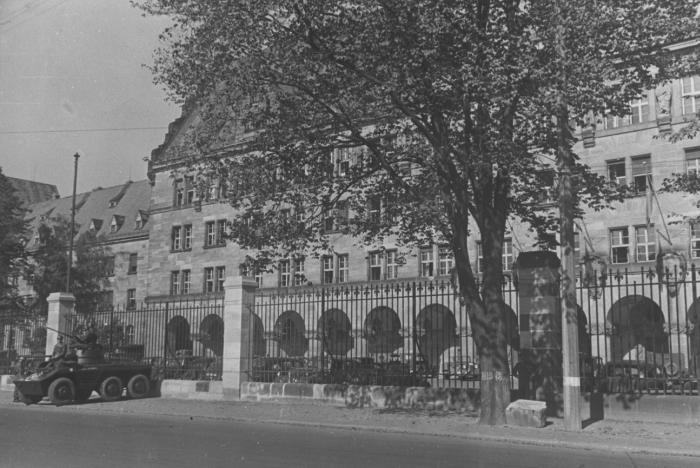 The Palace of Justice in Nuremberg on the day the judgement of the International Military Tribunal was handed down. Nuremberg, Germany, October 1, 1946. —US Holocaust Memorial Museum, courtesy of Gerald (Gerd) Schwab

The International Military Tribunal (IMT) issues verdicts against leading Nazis at Nuremberg. It sentences 12 leading Nazi officials to death for crimes committed during the Nazi regime.

Each of the four Allied nations—the United States, Great Britain, the Soviet Union, and France—supplied a judge and a prosecution team to the IMT for the trial of selected German officials representing a cross-section of Nazi diplomatic, economic, political, and military leadership. The IMT indicted the defendants on charges of crimes against peace, war crimes, and crimes against humanity. Three of the four judges were needed for conviction. In the end, 12 defendants were sentenced to death, among them Joachim von Ribbentrop, Hans Frank, Alfred Rosenberg, and Julius Streicher. They were hanged, cremated in Dachau, and their ashes dropped in the Isar River. Hermann Goering, second only to Hitler in the Nazi regime, escaped the hangman's noose by committing suicide before his execution. The IMT sentenced three defendants to life imprisonment and four to prison terms ranging from 10 to 20 years. It acquitted three of the defendants.

Despite a series of postwar trials, many perpetrators of Nazi-era criminality have never been tried or punished.

The Defendants at Nuremberg 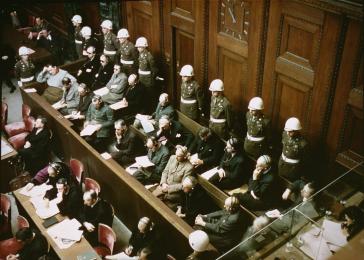 View of the defendants in the dock at the International Military Tribunal trial of war criminals at Nuremberg. Germany, November 1945. —US Holocaust Memorial Museum, courtesy of National Archives and Records Administration, College Park, MD