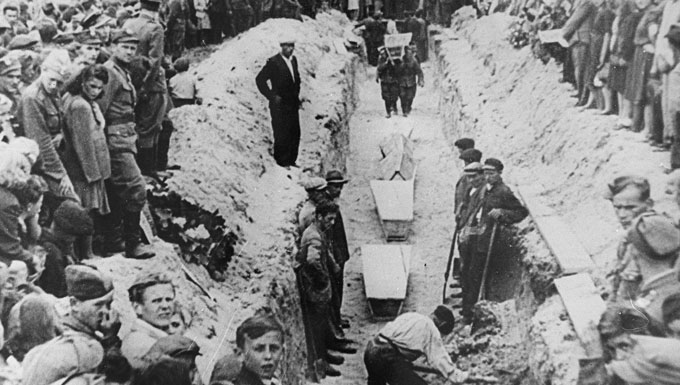 Mourners crowd around a narrow trench as coffins of pogrom victims are placed in a common grave, following a mass burial service. Kielce, Poland, after July 4, 1946. —Wide World Photo

A violent massacre of Jews in the southeastern Polish town of Kielce takes place.

The mass violence of the Kielce pogrom drew on an entrenched local history of antisemitism—especially false allegations accusing Jews of using the blood of Christian children for ritual purposes (a charge known as a “blood libel”)—with the intent of discouraging the return of Jewish Holocaust survivors to Poland. While the pogrom was not an isolated instance of anti-Jewish violence in postwar Poland, the Kielce massacre convinced many Polish Jews that they had no future in Poland after the Holocaust and spurred them to flee the country. Coming just one year after the end of World War II, the massacre shocked people around the world.