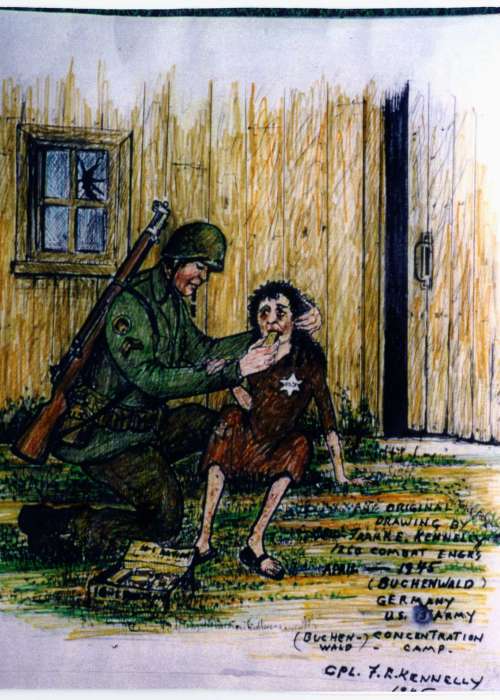 Pen and ink drawing by Corporal Frank Kennelly in April 1945, capturing a scene during the liberation of Buchenwald. —US Holocaust Memorial Museum Collection, Gift of Byrnice Dunn

US forces liberated the Buchenwald concentration camp on April 11, 1945. Corporal Frank Kennelly of Philadelphia, a member of the 1260th Combat Engineers, drew this piece to commemorate what he saw at Buchenwald. The caption on the back of the drawing reads “Original pen and ink drawing from a sketch I made in Germany, April 1945 (Buchenwald Concentration Camp) CPL Frank E. Kennelly, Phila, PA, 1992-1260th Combat Engs.”

Kennelley’s drawing depicts in black and colored ink a military officer kneeling on the ground next to a thin woman wearing a Star of David and feeding her.

Previous: US Forces Liberate Buchenwald Next: Liberation of Westerbork