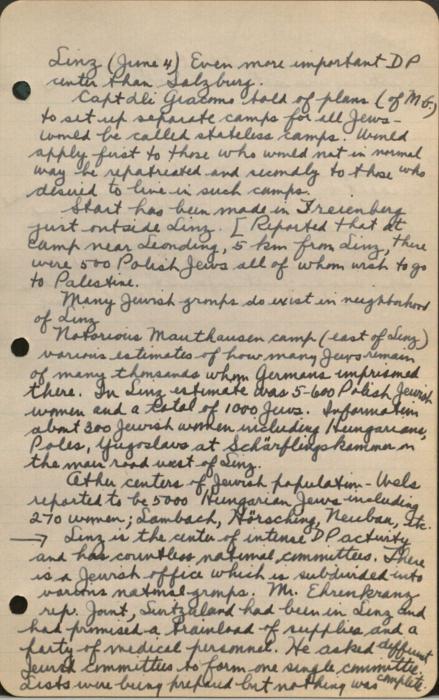 Page from Earl G. Harrison's notebook, recording his impressions of Linz, Austria, while on a tour of displaced persons camps in 1945. —US Holocaust Memorial Museum, courtesy of Earl Harrison, Jr. Read more about the notebook

Capt DiGiacmo told of plans (of M.G.) to set up separate camps for all Jews – would be called stateless camps. Would apply first to those who would not in normal way be repatreated and secondly to those who desired to live in such camps.

Start has been made in Freienberg just outside of Linz. [Reported that at camp near Leonding, 5 km from Linz, there were 500 Polish Jews all of whom wish to go to Palestine.

Many Jewish groups do exist in neighborhood of Linz.

Notorious Mauthausen (east of Linz) various estimates of how many Jews remain of many thousands whom Germans imprisoned there. In Linz estimate was 5-600 Polish Jewish women and a total of 1000 Jews. Information about 300 Jewish women including Hungarians, Poles, Yugoslavs at Scharflingskammen on the main road west of Linz.

[arrow is drawn here] Linz is the center of intense DP activity and has countless national committees. There is a Jewish office which is subdivided into various national groups. Mr. Ehrenkranz rep Joint, Switzerland had been in Linz and had promised a trainload of supplies and a party of medical personnel. He asked different Jewish committees to form one single committee. Lists were being prepared but nothing was complete.

Earl G. Harrison, former Commissioner of Immigration and Naturalization, toured the newly formed displaced persons camps in the summer of 1945. This page, taken from the notebook he kept while on his tour, shows his impressions of Linz, Austria.

In June 1945, the Department of State arranged for Harrison to conduct an inquiry into the current and future needs of displaced persons in Germany and Austria who were unable or unwilling to return to their homelands. President Truman gave Harrison's mission his stamp of approval.

Harrison's report of August 1945 harshly criticized the US and British treatment of Jewish DPs, called for major changes to Jewish DP policy, and recommended steps to resettle DPs in the United States and to increase Jewish emigration to Palestine.