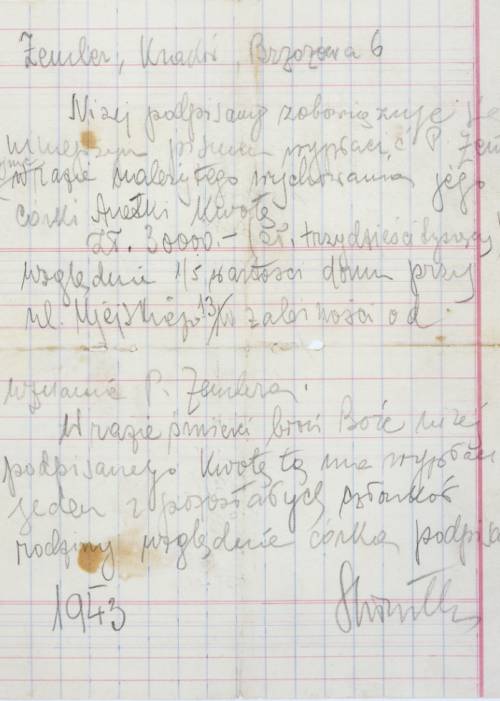 A letter from Selek and Eda Kuenstler to Sophia Zendler promising land in exchange for hiding their daughter. —US Holocaust Memorial Museum, courtesy of Anita Kuenstler Epstein

A letter from Selek and Eda Kuenstler to Sophia Zendler beseeches Zendler to save the child from "annihilation."

Salek and Eda Kuenstler married in Krakow on August 30, 1939. Anita was born on November 18, 1942, in the Krakow ghetto. When she was three months old, her parents spirited her out of the ghetto, persuading the Zendlers, a Catholic family, to hide her. Anita's father promised to pay Mrs. Zendler 30,000 zloty to care for the child. The Zendlers, who had three children of their own, baptized Anita and raised her as a Catholic. Salek was killed in the Mauthausen camp. Eda survived two labor camps and incarceration in Auschwitz and Bergen-Belsen, where she was liberated in April 1945. After hospital treatment for typhus she returned to Krakow and found Anita. Eda and Anita went with other Jews to a displaced persons' camp in Selb, Germany near the Czechoslovakian border. They lived in Selb until 1949 and then came to the United States on a troop ship, the USS Taylor.

The letter was written just weeks before the liquidation of the Krakow ghetto.