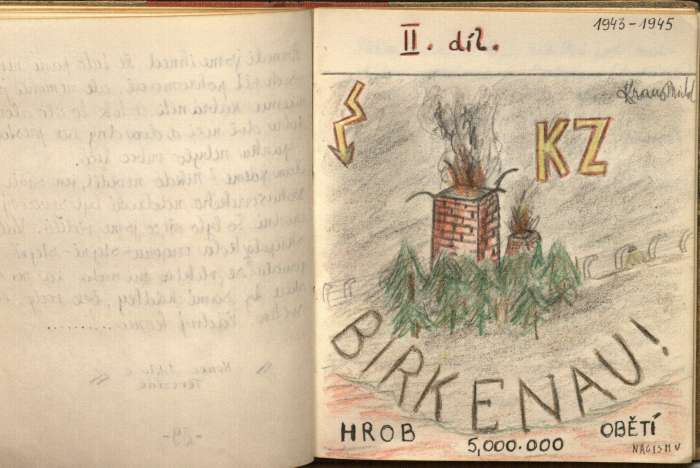 Illustration for the segment about Auschwitz in Michael Kraus’s postwar diary. —US Holocaust Memorial Museum, gift of Michael Kraus

“On July 11 I did not sleep. The night was bright, the sky red. Of that—somewhere—I can’t talk about it. On July 11 they killed my father. I balled my fists; I cried and promised to avenge him.”

This description comes from an entry in Michael Kraus’s postwar diary of events in Theresienstadt, Auschwitz, and Mauthausen. After losing both his parents in camps, Michael Kraus began writing a series of diaries to document his and his parents’ experiences.

The text on the image reads: “KZ” for Konzentrationslager, or concentration camp Birkenau; Oběti, victims; and Hrob, grave. Michael thus describes Birkenau as the grave of five million victims. The illustration reflects what Michael knew at the time about the number of victims. Learn more about Michael’s diary in Curators Corner—“To the Memory of My Parents”: Michael Kraus’s Diaries.