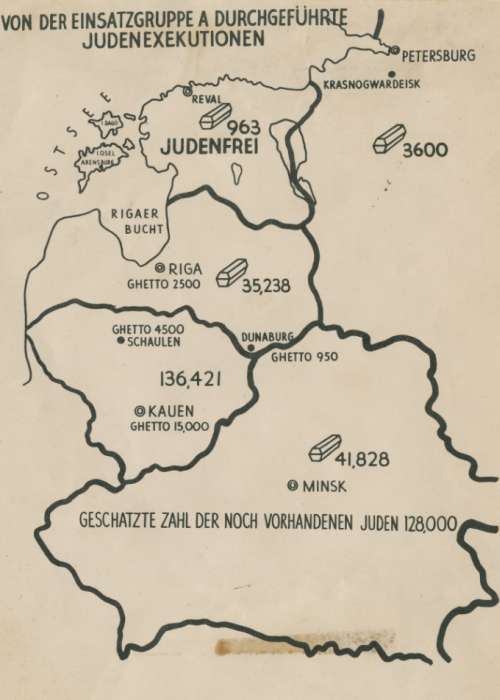 Map from an undated report submitted by Stahlecker on killings carried out through the end of January 1942. The report is entitled “Jewish Executions Carried out by Einsatzgruppe A.” This map was entered into evidence at the Einsatzgruppen trial. The map shows the area between the German-Soviet Demarcation Line and the area of the farthest German Army advance in the Soviet Union at the time. A Summary Report of charts, maps, analytical reports and illustrations was compiled by SS-Brigadier General Stahlecker. This information was presented to the Reich Security Main Office in Berlin in February 1942. All of the deaths recorded on this map occurred between June 22, 1941 and January 31, 1942. —US Holocaust Memorial Museum, courtesy of Thomas Wartenberg

SS-Brigadier General Walter Stahlecker submits a summary report on the killing of Jewish civilians in the northwestern region of the Soviet Union. The report documents the killing of more than 118,000 unarmed Jewish men, women, and children by men under Stahlecker’s command between June 22 and October 15, 1941. He submits his report to the Reich Security Main Office in Berlin, which has responsibility for carrying out the Holocaust in German-occupied Europe during World War II.

Stalhlecker commanded Einsatzgruppe A, one of four German special action units assigned to kill Jews, Roma (Gypsies), communists, and government officials during the invasion of the Soviet Union in 1941.  With the help of local auxiliaries, informants, and interpreters, Stahlecker’s men swept through the Baltic States and Belarus directly to the home communities of Jews (especially in Kovno, Riga, Vilna, and Minsk) and shot them without regard for age or sex.

Stahlecker’s report was submitted as evidence of Nazi atrocities (crimes against humanity) at the Nuremberg war crimes trials after the war.

Previous: Occupation of Kiev Next: Deportations of German, Austrian, and Czech Jews