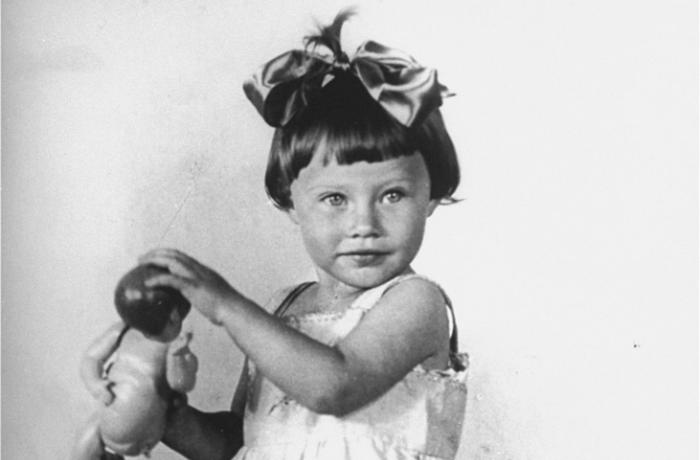 Portrait of two-year-old Mania Halef, a Jewish child, who was later killed during the mass execution at Babi Yar. —US Holocaust Memorial Museum, courtesy of Yelena Brusilovsky

Before the war about 160,000 Jews resided in the city, comprising about 20 percent of Kiev's population. Approximately 100,000 Jews fled the city in advance of the Germans. During the first days of the German occupation, two major explosions, apparently set off by Soviet military engineers, destroyed the German headquarters and part of the city center. The Germans used the sabotage as a pretext to murder the remaining Jews of Kiev. On September 29–30, 1941, SS and German police units and their auxiliaries murdered the Jewish population of Kiev at Babi Yar, a ravine northwest of the city. As the victims moved into the ravine, Einsatzgruppe C detachments shot them in small groups. According to reports by the Einsatzgruppe to headquarters, 33,771 Jews were massacred in two days. In the months following the massacre, German authorities stationed at Kiev killed thousands more Jews at Babi Yar, as well as non-Jews including Roma (Gypsies), Communists, and Soviet prisoners of war. It is estimated that some 100,000 people were murdered at Babi Yar. This was one of the largest mass murders at an individual location during World War II