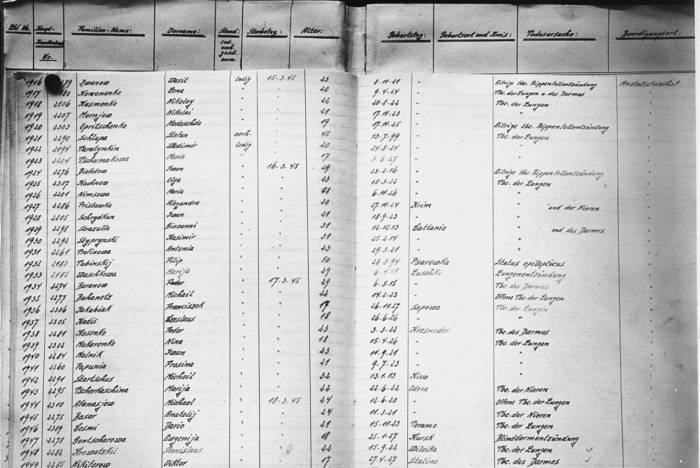 A page of the Hadamar Institute's death register in which the causes of death were faked to conceal the euthanasia killings that took place there. An American military photographer took the picture of the register on April 5, 1945, soon after the liberation. —National Archives and Records Administration, College Park

Responding in part to the public protest of the Catholic Archbishop of Münster, Clemens von Galen, Adolf Hitler orders the cessation of centrally coordinated “euthanasia” killings.

Up to this date, German health care professionals murdered approximately 70,000 people at “euthanasia” facilities. The killing operations continued, however, involving both adults and children with physical and intellectual disabilities. Among the methods used were starvation, lethal injection, and deliberate failure to treat serious disease. Hitler's call for a halt to the T4 action did not mean an end to the "euthanasia" killing operation. The child "euthanasia" program continued as before. Moreover, in August 1942, German medical professionals and healthcare workers resumed the killings, albeit in a more carefully concealed manner than before. More decentralized than the initial gassing phase, the renewed effort relied closely upon regional exigencies, with local authorities determining the pace of the killing.