Soviet Prisoners of War in Minsk 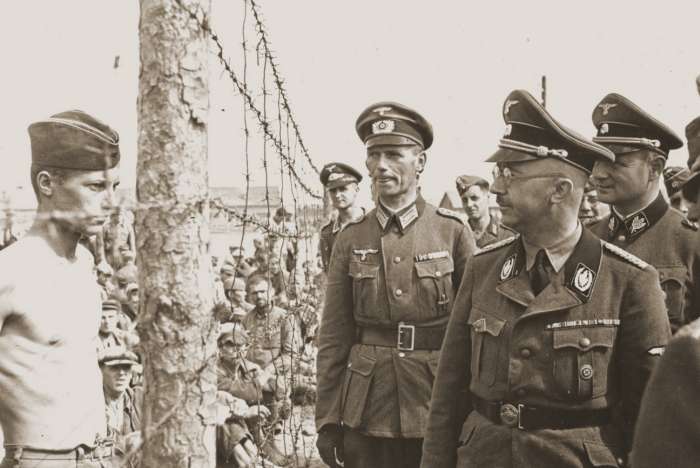 Heinrich Himmler looks at a young Soviet prisoner during an official visit to a prisoner-of-war camp in the vicinity of Minsk. —US Holocaust Memorial Museum, courtesy of National Archives and Records Administration, College Park, MD

Heinrich Himmler, the Chief of the German Police and Reich Leader of the SS, inspects Soviet prisoners of war (POWs) at a German camp in Minsk, Belarus.

The Nazi-German state depicted the war against the Soviet Union as a racial war between German "Aryans" and subhuman Slavs and Jews. From the very beginning the war against the Soviet Union included the brutal treatment of Soviet prisoners of war (POWs) by the Germans, in violation of every standard of warfare, and the killing of POWs on a massive scale.  During World War II, some 5.7 million Soviet army personnel fell into German hands. By January 1945, the German army reported that only about 930,000 Soviet POWs remained in German custody. The German army had released about one million Soviet POWs to serve as pro-German auxiliaries in the war and about half a million Soviet POWs had escaped German custody or had been liberated by the Soviet army as it advanced westward through eastern Europe into Germany. The remaining 3.3 million, or about 57 percent of those taken prisoner, were dead by the end of the war. Second only to the Jews, Soviet prisoners of war were the largest group of victims of Nazi racial policy.