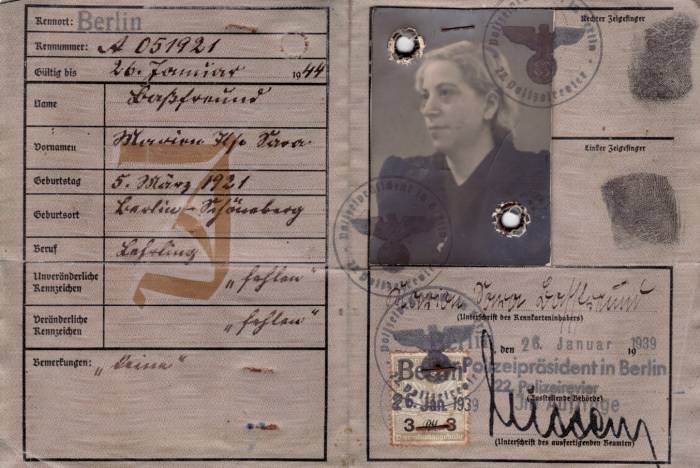 Identification card issued to Marion Basfreund and stamped with a red J for Jude and the added middle name of "Sara." —US Holocaust Memorial Museum, courtesy of Hilary Dalton

On October 5, 1938, the Reich Ministry of the Interior invalidates all German passports held by Jews. Jews must surrender their old passports, which will become valid only after the letter “J” has been stamped on them.

The government required Jews to identify themselves in ways that would permanently separate them from the rest of the German population. In an August 1938 law, authorities decreed that by January 1, 1939, Jewish men and women bearing first names of “non-Jewish” origin had to add “Israel” and “Sara,” respectively, to their given names. All German Jews were obliged to carry identity cards that indicated their heritage, and, in the autumn of 1938, all Jewish passports were stamped with an identifying red letter “J”. As Nazi leaders quickened their war preparations, antisemitic legislation in Germany and Austria paved the way for more radical persecution of Jews.