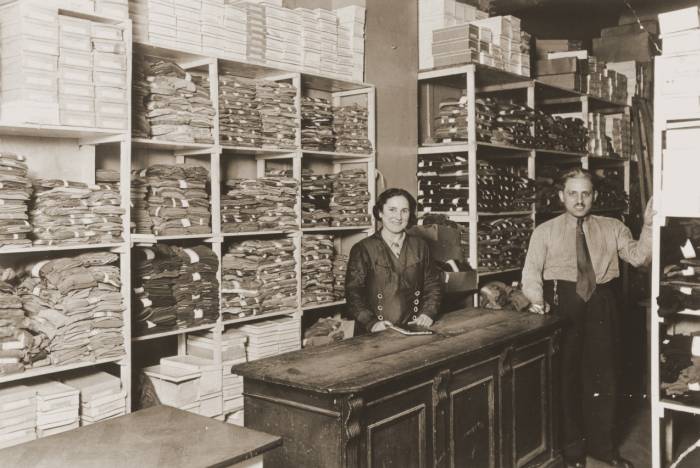 Prewar photograph of Jewish business owners David and Janka Penner in their dry goods store. In 1940 David and Janka left Berlin, going to Belgium and France. They were then interned separately by the French police before escaping to North Africa. Berlin, Germany, 1932–1928, —US Holocaust Memorial Museum, courtesy of Ilona Penner Blech

On November 12, 1938, the German government issues the Decree on the Elimination of the Jews from Economic Life (Verordnung zur Ausschaltung der Juden aus dem deutschen Wirtschaftsleben). The decree bars Jews from operating retail stores, sales agencies, and from carrying on a trade. The law also forbids Jews from selling goods or services at an establishment of any kind.

During the first six years of Hitler's dictatorship, from 1933 until the outbreak of war in 1939, Jews felt the effects of more than 400 decrees and regulations that restricted all aspects of their public and private lives. Many of these were national laws that had been issued by the German administration and affected all Jews. But state, regional, and municipal officials, acting on their own initiatives, also promulgated a barrage of exclusionary decrees in their own communities. Thus, hundreds of individuals in all levels of government throughout the country were involved in the persecution of Jews as they conceived, discussed, drafted, adopted, enforced, and supported anti-Jewish legislation. No corner of Germany was left untouched. 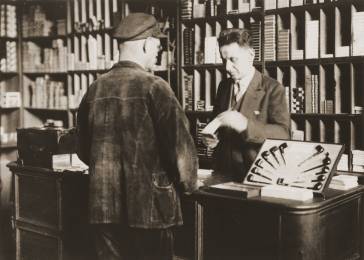 Arthur Lewy confers with a customer in his tobacco shop in Berlin. Arthur and his family endured increasing antisemitic agitation in the years following the Nazi rise to power in 1933. Arthur was arrested in 1938; though he was promptly released, he was soon forced to sell his business. Photograph taken in Berlin, Germany, 1938. —US Holocaust Memorial Museum, courtesy of Stephan H. Lewy