On May 10, 1933, university students burn upwards of 25,000 “un-German” books in Berlin’s Opera Square. Some 40,000 people gather to hear Joseph Goebbels deliver a fiery address: “No to decadence and moral corruption!”

As part of an effort to align German arts and culture with Nazi ideas (Gleichschaltung), university students in college towns across Germany burned thousands of books they considered to be “un-German,” heralding an era of state censorship and cultural control. Students threw books pillaged mostly from public and university libraries onto bonfires with great ceremony, band-playing, and so-called “fire oaths.” The students sought to purify German literature of “foreign,” especially Jewish, and other immoral influences. Among the authors whose works were burned was Helen Keller, an American whose belief in social justice encouraged her to champion disabled persons, pacifism, improved conditions for industrial workers, and women's voting rights. 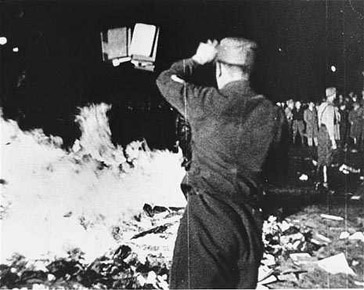 A member of the SA throws confiscated books into the bonfire during the public burning of "un-German" books on the Opernplatz in Berlin, May 10, 1933. — US Holocaust Memorial Museum, courtesy of National Archives and Records Administration, College Park, MD

Previous: Law Limits Jews in Public Schools Next: Law for the “Prevention of Offspring with Hereditary Diseases”