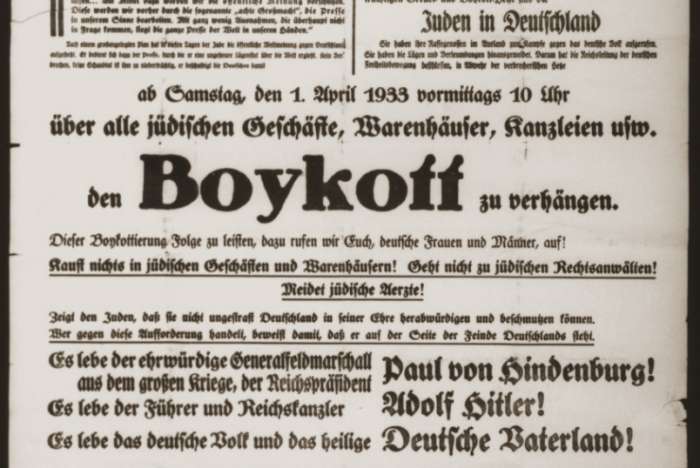 Public notice, issued by the Central Committee for the Defense against Jewish Atrocities and the Boycott, instructing Germans to protect themselves against the Jews by boycotting Jewish businesses and Jewish professionals on April 1, 1933. —US Holocaust Memorial Museum, courtesy of Hans Levi

Less than 3 months after coming to power in Germany, the Nazi leadership stages an economic boycott targeting Jewish-owned businesses and the offices of Jewish professionals.

The boycott was presented to the German people as both a reprisal and an act of revenge for the bad international press against Germany since the appointment of Hitler’s government in January, 1933. The Nazis claimed that German and foreign Jews were spreading “atrocity stories” to damage Germany's reputation. Nazi Storm Troopers stood menacingly in front of Jewish-owned department stores and retail establishments, and outside the offices of Jewish professionals, holding signs and shouting slogans such as "Don't Buy from Jews" and "The Jews Are Our Misfortune."

Although the national boycott campaign lasted only one day and was ignored by many individual Germans who continued to shop in Jewish-owned stores and seek the services of Jewish professionals, the boycott marked the beginning of a nationwide campaign by the Nazi Party against Jews in Germany that would culminate in the Holocaust. 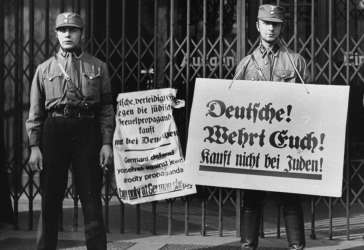 SA men with boycott signs block the entrance to a Jewish-owned shop. The signs read: "Germans, defend yourselves against the Jewish atrocity propaganda, buy only at German shops!" and "Germans! Defend yourselves! Do not buy from Jews!" Berlin, Germany, April 1, 1933. —National Archives and Records Administration, College Park

Previous: Establishment of Dachau Camp Next: Law for the Restoration of the Professional Civil Service