The Museum is racing to rescue the evidence of the Holocaust—archives, documents, photographs, videos, and artifacts—to help us better understand this history and to bring its lessons to future generations.

Alfred Rosenberg’s diary is one such artifact that has surfaced after more than a decade of Museum efforts to find it. The more than 400 pages of loose-leaf paper cover the years 1936 through 1944, when Rosenberg was responsible for looting valuables in lands occupied by the Nazis and planning Nazi rule of conquered Soviet territories.

The Museum’s acquisition of the diary enables its contents to be made available online for the first time. This expanded access will provide new insight into the politics of Nazi leaders and the mindset and behaviors of perpetrators, helping us understand how the Holocaust happened.

View scans of individual pages of the diary alongside a transcript of the original German.

Please note: The transcript comprises the German text of Alfred Rosenberg’s diary entries from 1936 to 1944. It does not include his entries from 1934 to 1935, held at the National Archives and Records Administration, or related documents, annotations, or references to already published portions of the diary. Deletions and emphases in the transcript resemble the original; square brackets enclose transcriber comments on legibility and style. The transcript has not been finalized for spelling ambiguities (especially regarding names) and other peculiarities of the original.

The Museum’s Center for Advanced Holocaust Studies, in cooperation with the Zentrum für Holocaust-Studien at the Institut für Zeitgeschichte, Munich, is preparing a comprehensive, annotated, and contextualized German-language print edition of Alfred Rosenberg’s diary entries from 1934 to 1944; publication is expected in fall 2014. An English-language edition is under consideration. 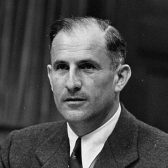 For almost 14 years, the Museum’s Robert M. W. Kempner Collection was incomplete. Kempner was a prominent German-Jewish jurist who opposed the Nazi Party’s rise to power. He lost his German citizenship in 1935 and in 1939 immigrated to the United States. After the war, he served as assistant US chief counsel during the International Military Tribunal at Nuremberg and as a prosecutor at the subsequent Nuremberg proceeding known as the “Ministries Case.”

As a researcher and prosecutor, Kempner had an eye for incriminating documents. He is credited, for example, with identifying the Wannsee Protocol, which documents a meeting of high-ranking Nazi and German officials to discuss implementation of the “Final Solution.” Kempner eventually shared the Wannsee Protocol with other prosecutors, and it became a centerpiece of the evidence submitted in the Ministries Case. He returned home with an unknown number of documents in his possession.

For the rest of his career, Kempner practiced law in the United States and Germany, mostly representing Jewish clients in Nazi restitution cases. He wrote articles that cited documents kept in his personal library, which other scholars did not have access to. He died in 1993, and in 1997 his heirs informed the Museum of their intention to donate a large number of documents.

The Search For The Diary

Museum staff first surveyed Kempner’s collection in August 1997 and made a detailed report of the documents they had been able to examine. After a dispute regarding the estate was resolved almost two years later, Museum staff returned to reassess the collection in July 1999. They discovered that many documents had been removed from Kempner’s home.

None of these collections of documents included the diary of Alfred Rosenberg, an influential Nazi ideologue. The author of The Myth of the Twentieth Century (1930), which embodies a dichotomist worldview pitting the “Aryan” and Jewish “races” against each other, Rosenberg reached the apex of his political career when Hitler appointed him Reich Minister for the Occupied Eastern Territories in July 1941. During the war years, he operated the most successful Nazi organization involved in the looting of artworks, books, and archival materials in German-occupied Europe.

After the war, Rosenberg was found guilty by the International Military Tribunal on counts of conspiracy to commit aggressive warfare, crimes against peace, war crimes, and crimes against humanity. He was hanged on October 16, 1946.

It was well known in academic circles that Rosenberg had kept a diary. The US National Archives has sections of the original diary and copies of other sections. Excerpts have been published in German. In articles, Kempner quoted from parts of the diary that no one else had ever seen. However, the diary was not among any of the Kempner document caches that Museum staff had seen.

Following clues about its location, the Museum worked for more than a decade to locate the diary. In early 2013, US Immigration and Customs Enforcement (ICE) Homeland Security Investigations (HSI) special agents in Wilmington, Delaware, located the diary with an individual in upstate New York. HSI special agents later seized it. As a piece of evidence gathered for the Nuremberg trials, the diary belongs to the US government, which has deposited it with the Museum. 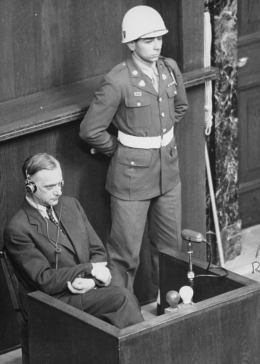 The Museum’s senior advisor on archives, Henry Mayer, said he feels a sense of fulfillment after years of searching for the diary. “To have it in safe hands, that is a great victory,” he said. As part of the Museum’s collections, the diary would be accessible to scholars and the public. While Museum scholars have yet to fully study its contents, Mayer said, “It does give details that one would never know about the politics within the top leadership of the Nazi party and the state.”