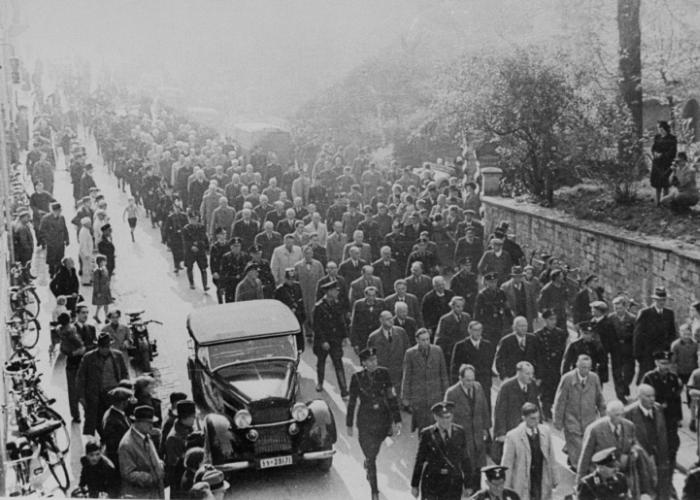 As was the case in Zeven, the events of Kristallnacht in Baden-Baden were captured on film. The synagogue and its furnishings were destroyed, and Jewish men in the city were arrested with many sent to concentration camps. The arrested men were paraded through the streets of Baden-Baden and forced to recite passages from Hitler's Mein Kampf, Der Stuermer, and other antisemitic writings at the pulpit of the synagogue before it was destroyed. US Holocaust Memorial Museum, courtesy of Lydia Chagoll

Male Jews are arrested during Kristallnacht. The next day, they are forced to march through the town streets under SS guard to watch the desecration of a synagogue. Later they are deported to Sachsenhausen concentration camp.

In this photograph, look for:

Don't forget to look for details. Can you tell which organization owns the car? How?

What are the different people doing?

The child appears to be following the procession. It is unclear whether he is emulating the Nazis, looking for someone in the column, or caught up in the excitement. The man in the park appears to be taking a photograph of the procession. The people on the side of the road are also watching the procession. They appear to be bystanders. It is unclear whether they came out specifically to watch. The men marching in the street are Jewish men who are under the guard of Nazi SS. The car belongs to the SS; this is indicated by the license plate markings. During Kristallnacht, the Nazis frequently made a public spectacle of their victims prior to their arrest. This was witnessed by a broad spectrum of the public, some of whom recorded what they saw.

Why would the Nazis march Jewish men through the city streets before arresting them?

The Nazis used public spectacle as a means to terrorize and propagandize the population. They also used the opportunity to publicly humiliate their victims.