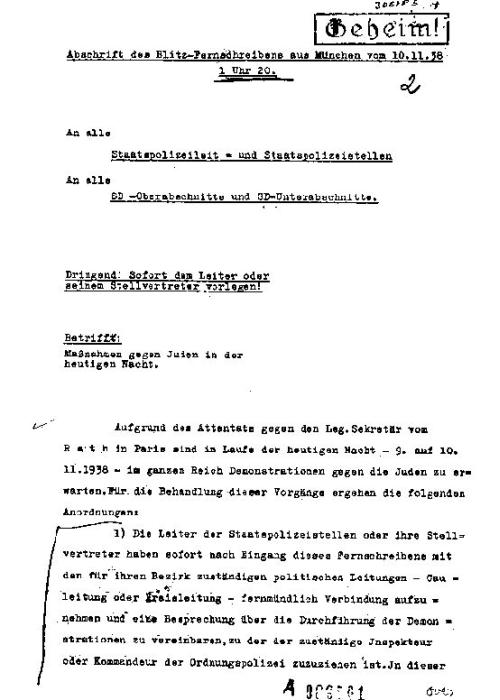 Headquarters and Stations of the State (Political) Police

Local and Regional Offices of the Security Service (SD)

Urgent! For immediate attention of Chief and his deputy!

Re: Measures Against the Jews Tonight.

Because of the assassination of Legation Secretary vom Rath in Paris, demonstrations throughout the Reich are to be expected tonight -- November 9 to 10, 1938. The following orders are issued for dealing with these occurances.

1) Upon receipt of this telegram, the chiefs of the political police [Gestapo] stations or their deputies must immediately contact the appropriate political authorities for their district [the local Nazi Party leaders]... by telephone to arrange a discussion about the conduct of the demonstrations. This discussion should include the competent Inspector or Commander of the Order Police....

To whom was this telegram addressed?

The telegram was addressed to all headquarters of the Secret State (Political) Police and to all local and regional offices of the Security Service (SD). The Secret State Police investigated political offenses and opponents of the regime. It was also known by its famous acronym, the Gestapo. The Gestapo was an agency of the German state; the SD was the intelligence service of the Nazi party.

What did the author instruct the police to expect?

They were told to expect anti-Jewish demonstrations throughout the Reich.

Who appears to have been in charge of coordinating the police role in the anti-Jewish "demonstrations?"

Though portrayed as spontaneous outbursts of popular outrage, the demonstrations were calculated acts of retaliation coordinated by the Nazi party's security apparatus and carried out by the SA, SS, and local Nazi party organizations. The author of this telegram was the Nazi Chief of the Security Police, Reinhard Heydrich; his signature and title are shown on the final page of the document. Heydrich instructed heads of the Secret State Police [Gestapo] to meet with local Nazi leaders and officials of the Order Police [uniformed police] to discuss the "conduct of the demonstrations."