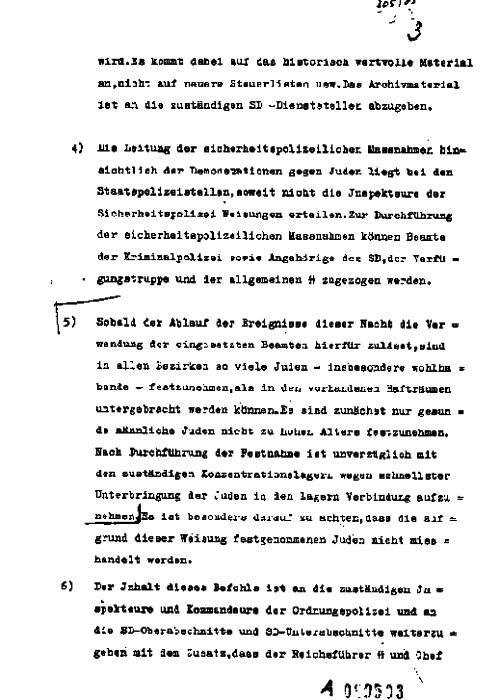 4) The direction of Security Police [both political and criminal divisions] operations relating to the anti-Jewish demonstrations resides with Political Police authorities except when orders are issued by Security Police inspectors. Officials from the Criminal Police as well as members of the Security Service (SD), of the SS para-military units, and of the general SS may be called upon to carry out Security Police operations.

5) As soon as the course of events during this night allows the assigned police officers to be used for this purpose, as many Jews -- particularly affluent Jews -- are to be arrested in all districts as can be accomodated in existing detention facilities. For the time being, only healthy male Jews, whose age is not too advanced, are to be arrested. Immediately after the arrests have been carried out, the appropriate concentration camps should be contacted to place the Jews into camps as quickly as possible. Special care should be taken that Jews arrested on the basis of this instruction are not mistreated.

6) The contents of this order are to be passed on to the competent Inspectors and Commanders of the Order Police and to regional and local sectors of the SD....

Why would Heydrich order the police forces to arrest "particularly affluent Jews" as opposed to those who were poor, and then add the instruction that "Jews arrested on this order are not [to be] mistreated?"

Kristallnacht marked the first time that Jews had been arrested on a massive scale and deported to concentration camps, and it furthered the Nazi goals of systematically stripping them of their property and accelerating emigration. More than 115,000 Jews left the Reich in the following 10 months. Wealthy, healthy, young adult males were more likely to have the means needed to guarantee their emigration from Germany. Frequently, they were released from imprisonment only when they could ensure that they would leave Germany.

How would the arrest of healthy adult males affect the livelihood of Jewish families in Germany?

In addition to the destruction of businesses, the mass arrest of Jewish men caused enormous hardships for families who were often left without any means of livelihood or hope.