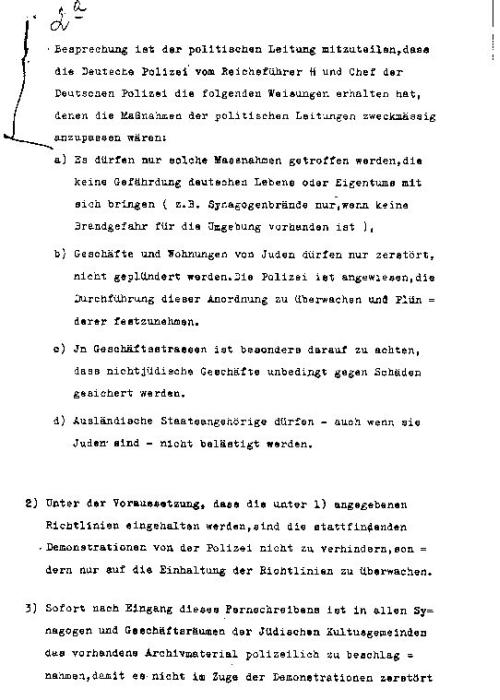 a) Only such actions may be carried out which do not threaten German lives or property (e.g., burning of synagogues only when there is no threat of fire to the surroundings).

b) Stores and residences of Jews may only be destroyed but not looted. The police are instructed to supervise compliance with this order and to arrest looters.

c) Special care is to be taken on commercial streets that non-Jewish businesses are completely secured against damage.

d) Foreign citizens, even if they are Jewish, may not be molested.

2) ... demonstrations in progress should not be prevented by the police but only supervised for compliance with the guidelines.

3) ... existing archival material is to be impounded by the police in all synagogues and offices of the Jewish community centers to prevent its destruction in the course of the demonstrations.... [This material] is to be turned over to the... offices of the SD.

What were the German police instructed to "protect"? What was not "protected"?

Police were instructed to protect the lives, property, and businesses of non-Jews and foreign citizens, Jewish or not. Police were not to interfere with attacks on, or destruction of, synagogues, businesses, and homes owned by Jews. Police were, however, instructed to arrest looters and confiscate archival materials recovered from synagogues and Jewish community centers. All archival information was to be handed over to the Nazi party's Security Service (SD) for intelligence and research purposes.

Why would the police be ordered to arrest looters but allow the destruction of Jewish-owned stores and businesses?

Although the Nazis sought to terrorize and pauperize the German Jewish community during Kristallnacht, they also had an interest in confiscating Jewish property and wealth in an orderly manner to enrich the Nazi party and German state. Part of the rationale for discouraging individual looting was that it gave an impression of lawlessness considered distasteful by many Germans. More important, however, was that the Nazi party had an interest in funneling all confiscated Jewish property and wealth into the party's coffers rather than into the hands of individual looters. Heydrich, author of the telegram, warned local Nazi political authorities that "German police have received . . . orders . . . to which the actions of the political authorities should be correspondingly adjusted."

Why did Heydrich warn local Nazis about his authorization for the police to arrest some rioters?
Who did this suggest was planning and participating in the actual rioting?

Local Nazi political authorities, many of whom were SA members, understood Goebbels statements earlier in the evening on November 9 as instructions to carry out anti-Jewish actions throughout the German Reich. Heydrich was warning these same Nazi authorities that the police had received orders to limit these actions in certain cases (such as to protect non-Jewish businesses and archival materials of importance). Nazi functionaries were to adjust their actions accordingly.

Why would the Nazis want to prevent the harassment of foreign citizens?