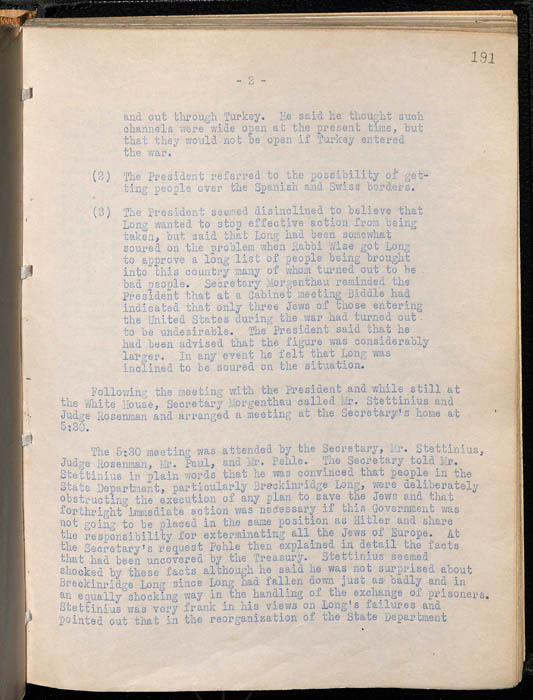 and out through Turkey. He said he thought such channels were wide open at the present time, but that they would not be open if Turkey entered the war.

The President referred to the possibility of getting people over the Spanish and Swiss borders.

The President seemed disinclined to believe that Long wanted to stop effective action from being taken, but said that Long had been somewhat soured on the problem when Rabbi Wise got Long to approve a long list of people being brought into this country many of whom turned out to be bad people. Secretary Morgenthau reminded the President that at a Cabinet meeting Biddle had indicated that only three Jews of those entering the United States during the war had turned out to be undesirable. The President said that he had been advised that the figure was considerably larger. In any event he felt that Long was inclined to be soured on the situation.

Following the meeting with the President and while still at the White House, Secretary Morgenthau called Mr. Stettinius and Judge Rosenman and arranged a meeting at the Secretary’s home at 5:30.

The 5:30 meeting was attended by the Secretary, Mr. Stettinius, Judge Rosenman, Mr. Paul, and Mr. Pehle. The Secretary told Mr. Stettinius in plain words that he was convinced that people in the State Department, particularly Breckinridge Long, were deliberately obstructing the execution of any plan to save the Jews and that forthright immediate action was necessary if this Government was not going to be placed in the same position as Hitler and share the responsibility for exterminating all the Jews of Europe. At the Secretary’s request Pehle then explained in detail the facts that had been uncovered by the Treasury. Stettinius seemed shocked by these facts although he said he was not surprised about Breckinridge Long since Long had fallen down just as badly and in an equally shocking way in the handling of the exchange of prisoners. Stettinius was very frank in his views on Long’s failures and pointed out that in the reorganization of the State Department

The memo reads in part, “[Secretary] Morgenthau advised the President that he was deeply disturbed about the failure of the State Department to take any effective action to save the remaining Jews in Europe.  He explained that the Treasury Department...had uncovered evidence indicating that not only were the people in the State Department inefficient in dealing with this problem, but that they were actually taking action to prevent the rescue of the Jews....the Secretary said he was convinced that effective action could be taken and referred to results that his father, Henry Morgenthau, Sr., had obtained when he was Ambassador to Turkey in getting the Armenians out of Turkey and saving their lives.”