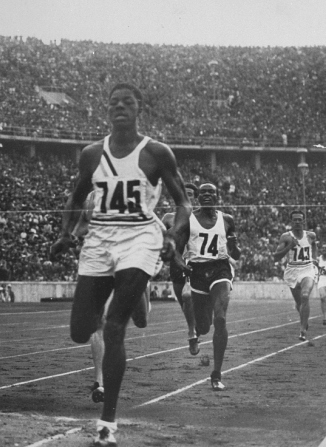 Eighteen black athletes represented the United States in the 1936 Olympics. African-Americans dominated the popular track and field events. Many American journalists hailed the victories of Jesse Owens and other blacks as a blow to the Nazi myth of Aryan supremacy.

John Woodruff was one of those athletes.

It was very definitely a special feeling in winning the gold medal and being a black man. We destroyed his [Hitler’s] master race theory, whenever we start winning those gold medals. So I was very proud of that achievement and I was very happy, for myself as an individual, for my race, and for my country.

Listen to Woodruff speaking about his experiences.

I was born in a small town about 50 miles south of Pittsburgh, just a small town, right in the mountains. My father was a laborer. My mother birthed 12 children. No member of my family ever finished high school. Only way that I could go to college was through athletics. My parents didn’t have the money to send me to school. In fact, I didn’t even have... when I received a scholarship to the University of Pittsburgh, I didn’t even have transportation to get to school.

In fact I never even thought in terms of going into the Olympics. Never thought in terms of that at all. And it was the coach that approached me on it and said he wanted me to try out for the team. There was one instance when we had a young German athlete come visit with us. And we were asking this young athlete, he spoke English fluently, and we asked him now, what did the people, the German people, think of Hitler? He said that they thought he was a very good man because of what he’d done for the country economically speaking. They thought that he was great for the country. But they didn’t realize that they had a Frankenstein on their hands, you see.

There was some talk about the Olympics being boycotted because of what Hitler was doing to the Jewish people in Germany. But it was never discussed amongst team members. We heard something about it, but we never discussed it. We weren’t interested in the politics you see, at all, we were only interested in going to Germany and winning.

It was the first time I’d ever taken a boat anywhere. Most of the blacks came from poor families, you see. None of us came from any wealthy homes, or middle class homes, most all from poor families. Jesse [Owens] came from a poor family too. I was very nervous for a young man, 21 years old, I’d never been so far away from home.

My only objective was any time I got into a race was to win. And that’s what I did. Determination. That’s what it takes. Light a fire in the stomach. I was winning for me and I was winning for the country. Me first, then the country. It was very definitely a special feeling in winning the gold medal and being a black man. We destroyed his [Hitler’s] master race theory, whenever we start winning those gold medals. So I was very proud of that achievement and I was very happy, for myself as an individual, for my race, and for my country.

The Museum’s exhibitions are supported by the Lester Robbins and Sheila Johnson Robbins Traveling and Special Exhibitions Fund, established in 1990.