From a Democratic Uprising to Full-Scale War Next 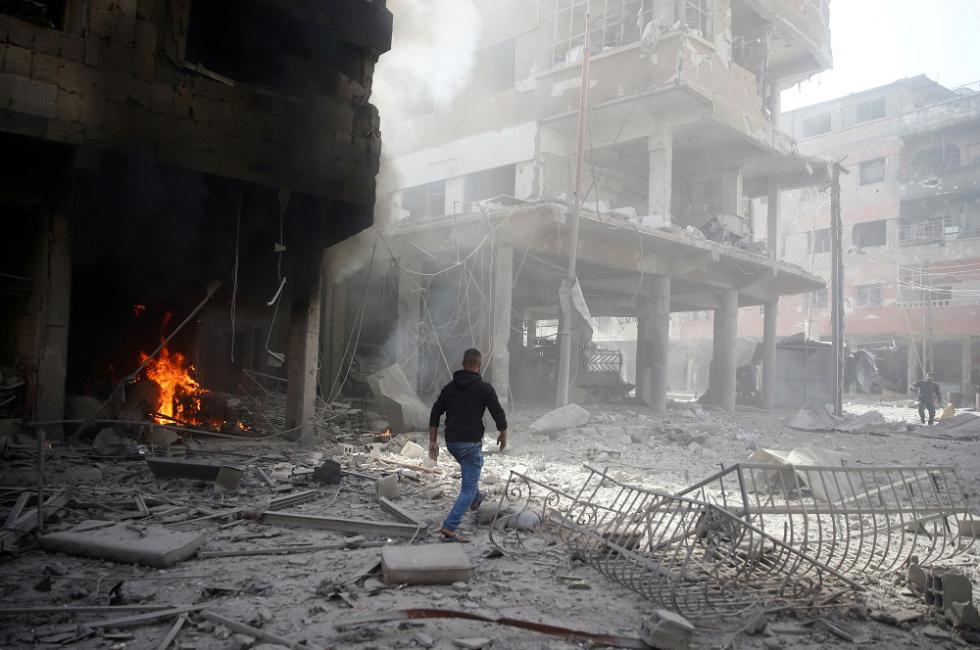 A man walks on rubble at a damaged site after an airstrike in the besieged town of Douma, Eastern Ghouta, Damascus, Syria. February 9, 2018. —REUTERS/Bassam Khabieh

Since its outbreak in March 2011, the conflict in Syria has cost the lives of nearly 500,000 people and displaced more than half the country's population. It has involved numerous mass atrocities, including crimes against humanity, the majority of which have been perpetrated by the Syrian government. Seven decades after the Holocaust and despite promises of Never Again, a regime is targeting its own people while the international community stands by.

“This conflict has caused a humanitarian catastrophe of staggering proportions.”

The conflict is not simply a civil war between opposing armed forces. What began as an uprising against President Bashar al-Assad’s regime has devolved into a violent struggle between local, national, regional, and international forces. The Syrian government, extremist groups, and outside actors have perpetrated mass atrocities against civilians as a systematic strategy of war.

The uprising’s deterioration into armed conflict in early 2012 caused a dramatic rise in the civilian death toll. Civilians have been targeted by multiple actors in Syria, most notably by Syrian government forces and militia loyal to the Assad regime, who are supported politically and militarily by Russia and Iran. Syrian and Russian forces have attacked civilian-inhabited areas with indiscriminate aerial bombardments. There have been no consequence to these attacks against civilians, increasing the risk that such mass atrocities will continue.

This conflict has caused a humanitarian catastrophe of staggering proportions. Syrian men, women, and children are under constant bombardment of their neighborhoods, schools, markets, and hospitals. They are subjected to starvation, exposure, and lack of medical care. They have endured enforced disappearances and torture in detention. They have been the victims of chemical weapons attacks—which are banned under international law—and torture, rape, and killings. As of March 2021, the number of Syrian refugees worldwide stands at 6.6 million, with 5.6 million being hosted in countries neighbouring Syria. Another 6.7 million are displaced within Syria, where 13.4 million people are also in need of humanitarian assistance and protection.

Title: Is the Worst Yet to Come? Ongoing Mass Atrocity Risks in Syria

Most recently, the Syrian government and its allies, Russia and Iran, have increased their assault on Idlib province in northwest Syria, one of the final rebel-held areas that has not been reclaimed by Assad. An estimated 3.4 million people—including one million children—now live in Idlib. Over two million of these displaced people are from elsewhere in Syria. There is a high risk that in Idlib these civilians will be harmed or killed.

Between November 1, 2019 and March 5, 2020, at least 1,500 airstrikes were launched on south-east Idlib and western Aleppo, in addition to ground attacks and indirect fire, including rockets, artillery and mortars. The impact on civilian life and infrastructure was severe, with 676 civilian deaths recorded. Syria and its allies attacked health facilities, schools, and markets. This violence reflects the pattern of the Syrian government and its allies to intentionally target necessary elements of civilian infrastructure throughout the war. Those trapped within Idlib have few places to go, as the border to Turkey is closed. With nowhere to flee, the population is at dire risk of mass killings by pro-Assad forces who perceive them as sympathetic to the rebels.

The Syrian people are not the only ones endangered by the conflict. The escalation of the fighting has increased political and military tensions throughout the region. Syria’s humanitarian crisis also has grave implications for security and other interests throughout the world.

From a Democratic Uprising to Full-Scale War Next