Land of the Hungry 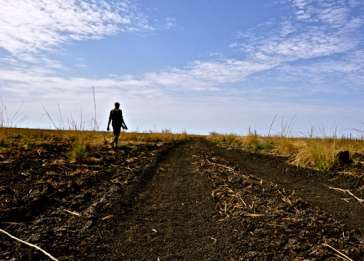 A SPLM-N solider on patrol at the outskirts of the Nuba Mountains.

Text and Photos by John Jefferson and Mark Hackett

For over two years, a humanitarian catastrophe has unfolded in Sudan’s Nuba Mountains as fighting intensifies between the government of Sudan and thousands of fighters from the Sudan People’s Liberation Movement-North (SPLM-N). Hundreds of thousands of civilians have been forced to flee their homes as the Sudanese government bombs civilian targets, destroys communities in scorched-earth ground attacks, and blocks humanitarian aid agencies from reaching people in need of assistance.

Mark Hackett is the CEO of Operation Broken Silence, a human rights non-profit that is the fiscal sponsor for a coalition of agencies working to bring relief to the hardest hit communities. John Jefferson works closely with this coalition and supervises aid missions into the region.

For security reasons, some names and locations have been removed from this post.

As we drove into the Nuba Mountains, it was apparent that no one was living on the fertile plains between the two mountainous areas we were traversing. Abandoned villages were common sights, fields sat fallow and rare SPLM-N troops were the only movement. The team was quickly informed that this was due to bombings, militia raids and marauding cattle and goat herders that had terrorized the people before the war and intensified their activities since its inception. Because of this, the people had fled into garrison towns.

The Nuba Mountains holds endless numbers of villages emptied of their inhabitants, as if they are eerie relics of a lost people. The shocking reality is that the empty communities symbolize the success of the government’s eradication program. In Bit Akel and El Feid, we saw both well-preserved and destroyed homes, some missing their grass roofs while others were intact. Looking at the empty villages one might assume they have been that way for years, but that is not the case. They are artifacts of the war: bombings and military attacks on civilians caused them to leave in a hurry. During the past 10 years of seeing how the Sudanese can transform a naked patch of earth into a place of vitality, tradition, and hospitality, we now know coming across the remains of what was a village is the result of some horrible event.

Thus, when we arrived at the first “small” garrison town, we were greeted by hundreds of women and children coming out of seemingly nowhere. Several sacks of sorghum were on hand and as the people started queuing up, it was evident that demand far exceeded the supply we had. Hundreds of scoops of grain were handed out. We began seeing smiles for the first time since we arrived. 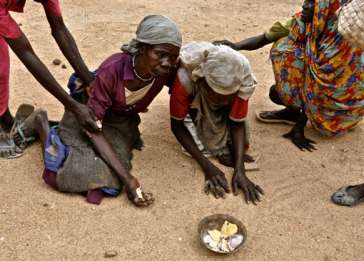 One thing was apparent about these people that have been subsisting on grasses, roots, and insects for over a year: they are incredibly strong and resilient in spirit, even though many were frighteningly thin. Weakness is not an option in a place where the threat of death from opportunistic disease and hunger looms constantly, and at any time Antanovs can drop cluster bombs on civilian targets at will. We could see determination in their eyes and hear it in their voices as the team interviewed one after another about what was happening and asked what they would like to tell the world. Stories about the bombings, humanitarian blockade, and questions as to why the outside world has forgotten them were common themes. We let them know we would continue to be their voice with the pictures and videos depicting their plight.

The next two distributions showed us people were subsisting on whatever they could find. Other than the sorghum we brought, there was no grain or any staple crops, much less animal husbandry. Because the people have been driven from their lands and forced to eat the animals they had, they are down to scratching out a living from what the earth provides. The roots they eat come from poisonous plants that must be processed over a period of days, first by soaking them in water, then by drying them in the sun to remove the poison.

It is difficult to see people living like this, and it is even more disturbing to realize that the actions leading to their slow starvation are due to purposeful, manmade decisions at the highest levels of the Sudanese government. The food we provided would have an enormous impact here, but by no means cover the more than 30,000 people in the area. 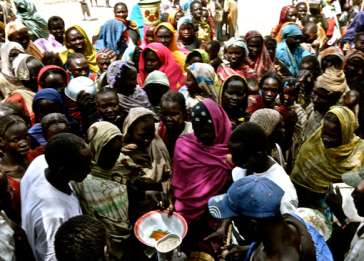 Since the war broke out over two years ago, the hundreds of kids in the villages around where we served had not been in school. Many of the children have not received decent instruction in a long time, if ever. There was even a school building, which we used to convene a session with some of the kids from the villages, whom we gave crayons and paper to so they could have an activity while we were there. Since then, we purchased school supplies and made arrangements to get lesson books so that classes could begin again. The food is essential, but right behind it is the need to have the next generation prepared to lead the survivors when this eradication campaign is over. Without education they know they have little chance of success and more likelihood of remaining a marginalized and forgotten people.