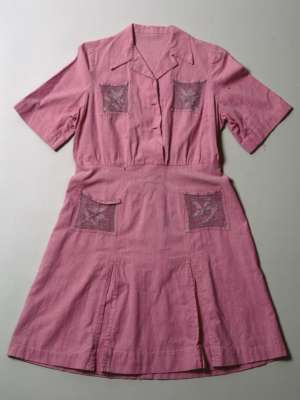 Dora Levy and her mother Sarina thought their ordeal was over when they were liberated by the British army in October 1944. Most of their immediate family had survived in hiding. They themselves had fled from the Salonika ghetto to Italian-controlled Athens in the spring of 1943 and managed to survive in hiding for a year and a half with little food or clothing. But the liberation brought little improvement in their economic situation, and the outbreak of the Greek Civil War shortly afterward prolonged the period of privation.

Since new clothing was beyond their means, Sarina and Dora used flour sacks from a nearby warehouse for fabric. Sarina washed the sacks and colored them with a red dye. Afterwards, Dora, who had supported herself in hiding as a dressmaker’s apprentice, cut the sacks and fashioned a dress for herself. She then embroidered the pockets to give it a more festive look. For several years Dora wore this dress as her special Sabbath garb. In February 2003 Dora Levy (now Saltiel) donated this dress to the Museum along with a cache of personal papers and photographs documenting the experience of her once large, extended family from Salonika.