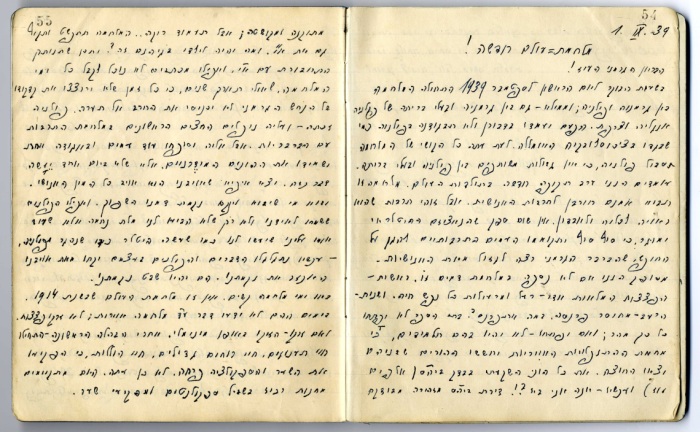 Entry dated September 1, 1939, from the diary of Chaim Kaplan. —US Holocaust Memorial Museum

Chaim A. Kaplan (1880–1942) was the principal of a pioneering Hebrew school in Warsaw when the war began. Although from the start Kaplan was convinced that “civilization” would defeat “the modern Huns,” he had no illusions about what was to come. On September 1, 1939, he wrote in his personal diary that there “was no hope for the Jewish people.” From the moment of the German invasion until his deportation from the Warsaw ghetto, Kaplan devoted himself to preserving a record of the destruction of Jewish communities in occupied Poland.

“This war will bring destruction upon human civilization. But this is a civilization that merits annihilation and destruction. There is no doubt that Hitlerian Nazism will ultimately be defeated, for in the end the civilized nations will rise up to defend the liberty which German barbarians seek to steal from mankind. However, I doubt that we will live through this carnage. The bombs filled with lethal gas will poison every living being, or we will starve because there will be no means of livelihood.”

Source for translation:
Chaim A. Kaplan. Scroll of Agony: The Warsaw Diary of Chaim A. Kaplan. Translated and edited by Abraham I. Katsch. Bloomington: Indiana University Press, 1999.