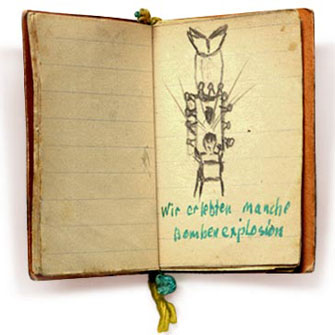 Translation: We lived through many exploding bombs.

There were very few real bombs in Berlin in 1941 and early 1942. The “bomb explosions” referred to here were the strong conflicts in the Jewish community over how to react to the Nazi deportations. Should they go when ordered? Where did the transports go to and what would await them?

At the time, the choice was unclear.

Nathan Schwalb of the Swiss He-halutz group warned the Berlin He-halutz groups not to comply with the deportation order. But many parents and the Jewish leadership were against any illegal actions and hoped they would be able to start a new life in the East. When Jews failed to report, the German police would round them up by force including community leaders.

What would await them?

In the first months of the deportations, the Nazis told their victims that they would be resettled in the “East.” Rumors were widespread, but few people had reliable information. Gad remembered later: “Information about what really happened in the East didn’t start trickling in until 1942. Rumors were heard on BBC radio about ‘abuse’ during the transports and in the concentration camp… In August 1942 we received a letter from Nathan Schwalb in Geneva. It resparked the debate. He warned us again (of) the death camps in Eastern Europe and told the Berlin He-halutz leadership to do everything possible to avoid deportation, either by fleeing or going underground.” 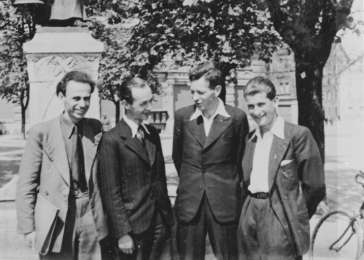 Nathan Schwalb (left) was the head of the He-halutz international bureau in Geneva, Switzerland, during the war. As early as 1941, he had attempted to convince the Jewish leadership in Berlin to organize escape routes. Throughout the war, Schwalb organized support for He-halutz groups in German-occupied Europe. One of those groups was “Chug Chaluzi” in Berlin, which was led first by Jizchak Schwersenz (right) and later by Gad Beck. These photos show Schwalb and Schwersenz after Schwersenz’s escape in early 1944, and Schwalb and his colleagues from the He-halutz bureau. 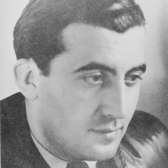 Alfred Selbiger was responsible for Youth Aliyah programs and was in regular contact with Zionist youth groups. On November 9, 1942, he was taken “hostage” by the Nazis together with 20 other Jewish community leaders as punishment for Jews who had not obeyed the deportation order. Selbiger and seven others were executed in November 1942.