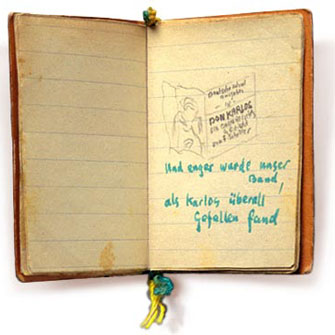 Translation: And our group was drawn closer, when Karlos was enjoyed by everyone.

In the late summer of 1941, Gad and Manfred played starring roles in Don Carlos. This late 18th-century German play, required reading for students of Gad and Manfred’s generation, deals with the choice between despotism and humanity, between the Prussian ideal of obedience and true self-expression and true love. In the play, Marquis von Posa, played by Gad, becomes the voice of all humanity, striving for freedom; Don Carlos, played by Manfred, is Posa’s soul mate. The play’s emotional style influenced Manfred’s writing style. By September 15, 1941, the Nazis ordered all German Jews to wear a yellow star. Some members of the group, risking immediate arrest, sometimes hid or removed their stars.

Fredrich Schiller (1759-1805) was one of the most influential German classical writers. His play Don Carlos (1787) centered on the tragic friendship between Marquis von Posa and Don Carlos and often was interpreted as an emotional plea to follow one’s heart. 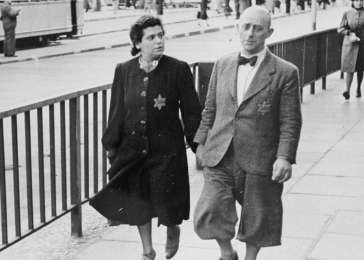 By September 15, 1941, Jews in Germany were forced to wear a yellow star. The six-pointed yellow star (as big as a palm) had a black border and the inscription “Jude” (Jew). The star, which also represented a public stigmatization, was introduced to facilitate the identification of Jews in preparation for their deportation to the East.