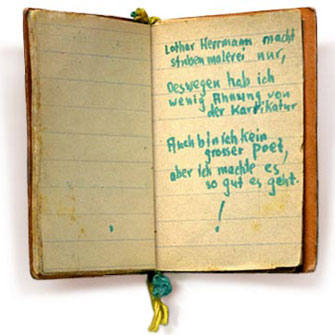 Translation: Lothar Herrmann only paints rooms, which is why I don't have much idea how to draw cartoons. Nor am I a mighty poet, but I did it as well as I could.

Manfred was a forced laborer for a small company that restored and repainted bombed apartments. The owner, Lothar Herrmann, was described by Manfred as a gruff but warmhearted working-class man.

By summer 1942, many of Gad and Manfred’s friends had already been deported. Every day, it seemed, meant another goodbye. Manfred, classified as ‘full-Jewish’ under the Nazi regime, was in greater danger than Gad. Gad was classified as ‘half-Jewish’ because his mother had been Christian before converting to Judaism. ‘Half-Jews,’ including Gad, continued to work as forced laborers.