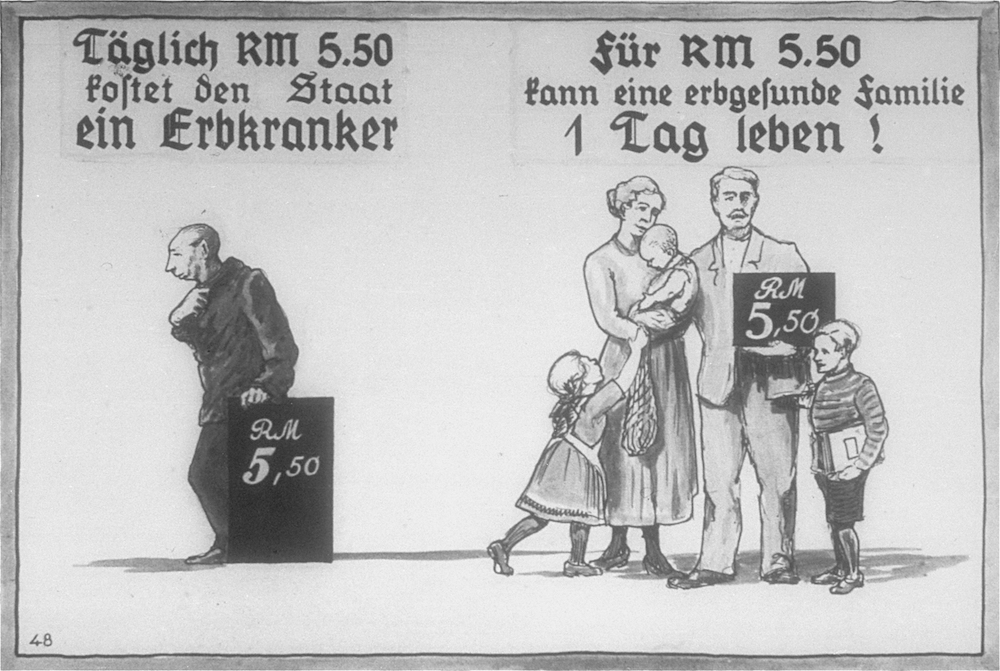 Nazi propaganda against the disabled. ——US Holocaust Memorial Museum, courtesy of Roland Klemig

On July 14, 1933, the Nazi government instituted the “Law for the Prevention of Progeny with Hereditary Diseases.” This law, one of the first steps taken by the Nazis toward their goal of creating an Aryan “master race,” called for the sterilization of all persons who suffered from diseases considered hereditary, such as mental illness, learning disabilities, physical deformity, epilepsy, blindness, deafness, and severe alcoholism. With the law’s passage the Third Reich also stepped up its propaganda against people with disabilities, regularly labeling them “life unworthy of life” or “useless eaters” and highlighting their burden upon society.

Just a few years later, the persecution of people with disabilities escalated even further. In the autumn of 1939, Adolf Hitler secretly authorized a medically administered program of “mercy death” code-named “Operation T4,” in reference to the address of the program’s Berlin headquarters at Tiergartenstrasse 4. Between 1940 and 1941 approximately 70,000 Austrian and German disabled people were killed under the T4 program, most via large-scale killing operations using poison gas. (This methodology served as the precursor to the streamlined extermination methods of the “Final Solution.”) Although Hitler formally ordered a halt to the program in late August 1941, the killings secretly continued until the war’s end, resulting in the murder of an estimated 275,000 people with disabilities.

The following bibliography was compiled to guide readers to selected materials on Nazi persecution of people with disabilities that are in the Library’s collection. It is not meant to be exhaustive. Annotations are provided to help the user determine the item’s focus, and call numbers for the Museum’s Library are given in parentheses following each citation. Those unable to visit might be able to find these works in a nearby public library or acquire them through interlibrary loan. Follow the “Find in a library near you” link in each citation and enter your zip code at the Open WorldCat search screen. The results of that search indicate all libraries in your area that own that particular title. Talk to your local librarian for assistance.

To search library catalogs or other electronic search tools for materials on disabled victims of the Nazi regime or related topics, use the following Library of Congress subject headings to retrieve the most relevant citations: